FORMATION OF AIPRPA FOR TIRUNELVELI DISTRICT OF TAMILNADU STATE

The meeting unanimously elected the following District Steering Committee to take all steps for enrolling maximum membership in the organisation and to organise the first District Conference of AIPRPA early:

Posted by Postal Pensioners at 03:25 No comments: 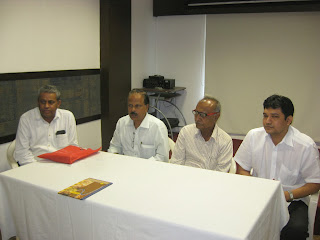 A meeting of Postal Department Pensioners of Gujarat held at the Hotel Kadamb Inn in Ahmedabad City under the Presidentship of Comrade R.G.Parmer [former Circle Secretary of AIPEU Postman & Group ‘D’] paved way for constitution of the Gujarat State Steering Committee for the All India Postal & RMS Pensioners Association. Comrade K.B.Barot All India Steering Committee Member of AIPRPA and former Working President of AIPEU Group ‘C’ CHQ as well as the former Circle Secretary Gujarat Circle took the initiative to organise the meeting.


The meeting formed a State Steering Committee with Comrades R.G.Parmer as Chairman; K.B.Barot as State Convenor; and S.S.Vaishya as Financial Secretary and decided to issue a Circular in the regional  language to all divisions immediately. The meeting also resolved to constitute Steering Committees for all divisions shortly to facilitate organising the state conference for Gujarat State before the special conference of AIPRPA.
Posted by Postal Pensioners at 07:42 No comments:

POSTAL AND EMAIL ADDRESSES FOR COMMUNICATION

Posted by Postal Pensioners at 18:42 No comments:

I declare that I am a Postal Pensioner and I wish to join as a basis member of the ________________________ Division / District Postal & RMS Pensioners Association. I understand that this is a voluntary association to work for the welfare of the pensioners and I assure that I shall abide by the bylaw of the Association and I am remitting this annual subscription of Rs._______ for the period from April _______ to March _______.

Posted by Postal Pensioners at 17:55 No comments:

ANDHRA COMRADES ARE PLANNING FOR FORMATION OF AIPRPA ALLROUND

The call for formation of All India Postal & RMS Pensioners Association has been  taken very seriously by Andhra Comrades and hectic organisational activities are reported from that State in this regard. Comrade T.Narasimhan Vice Chairman of AIPRPA Headquarters and Comrade Y.Nagabhushanam Member of the All India Steering Committee are from Andhra, where the following formations of AIPRPA and convertions of existing Postal Pensioners into AIPRPA are taken place and the State is moving fastly towards holding the State Convention of AIPRPA in Visakhapatnam during January 2014 for forming the State Organisation of AIPRPA.

1.     AIPRPA of RMS 'Y' Division: A Pensioners Organisation in RMS 'V' Division in Visakhapatnam with Comrade S.Shankar Rao as President and Comrade P.Babuji as the Secretary and Comrade Y.Subba Rao as Treasurer is already in existence and functioning. On 5.11.2013 the Executive Meeting of this Organisation had unanimously resolved to convert their organisation into the AIPRPA Divisional Organisation of RMS 'V' Division. All India Steering Committee Member Comrade Y.Naghabhushanam attended the Executive Meeting and guided. In addition to joining the AIPRPA these Comrades expressed their willingness to host the first State level Convention to found the State Organisation of AIPRPA.

3.     AIPRPA of Rajahmundry: An organisation of Postal Pensioners is already functioning in Rajahmundry Division and in a meeting held on 8.11.2013 under the Presidentship of Comrade G.S.N.Murthy it was unanimously resolved to convene a GB Meeting of the existing Organisation and convert it into a Divisional Organisation of AIPRPA . NFPE R3 branch Secretary Comrade K.Satyanarayana and Comrade O.L.Narayana took the initiative for this meeting to form the AIPRPA.

4.     AIPRPA of GUDUR: As already reported in our website with photographs, AIPRPA has been formed in Gudur Division in a well-attended meeting of Postal Pensioners on 10.11.2013 with Comrade T.V.Chalapathi as Honorary Chairman; Comrade K.L.N.Reddy as Chairman; Comrade J.Rajaiah as District Secretary; and K.Martin Luther as Finance Secretary. NFPE leader and Divisional Secretary P3 Comrade Sudhakar took all the initiative for organising the Gudur AIPRPA. Com.P.Pandurangarao GS GDS NFPE also took part in the Conference. Comrade K.Ragavendran General Convenor AIPRPA and Comrade Y.Naghabhushanam All India Steering Committee Member attended.

5.      AIPRPA of Chittoor District: As already reported in our website with photographs, the Executive meeting of the existing Postal Pensioners Organisation in Tirupathi has unanimously resolved to convert it into AIPRPA of Chittore District. A Special GB meeting will be convened shortly to ratify the decision and form the AIPRPA. This decision was taken in a meeting presided over by Comrade Sridhar babu P3 Divisional President. The initiative was taken by the Divisional Union of P3 and R3 under the guidance of Comrade Sridhar Babu. Comrade K.Ragavendran General Convenor AIPRPA; Comrade Y.Naghabhushanam All India Steering Committee Member; and Comrade S.K.Humayun CHQ President of P4 NFPE attended.

Posted by Postal Pensioners at 05:48 No comments:


A 7 Member District Steering Committee with the former General Secretary of All India Postal Accounts Employees Association Comrade P.Rajanayagam as its Convenor has been formed on 17.11.2013 in a meeting of Pensioners at Nagercoil. The meeting decided to complete the enrolment of membership immediately and organise the district conference before 22.12.2013 State Conference at Salem.
Posted by Postal Pensioners at 04:43 No comments:


The formation conference of the All India Postal & RMS Pensioners Association of Pondicherry division was held on 12.11.2013 in the premises of Chamber of Commerce at Pondicherry. The Conference was held under the presidentship of Comrade R.Natarajan who himself is the Secretary of the Central Government Pensioners Association of Pondicherry and the former Divisional Secretary of P3 NFPE and in the presence of Comrade N.Nagarajan former President of P3 NFPE and Comrade R.Kaliaperumal Retired Chief Postmaster Chennai GPO. Comrade K.Ragavendran General Convenor AIPRPA attended the conference.
The AIPRPA is formed in Pondicherry division by carving out the Postal Pensioners Organisation as a separate entity from the combined Pensioners Organisation. All cooperation and joint functioning would be maintained with the composite Pensioners Organisation while maintaining a separate organisational existence under the AIPRPA. The problems confronted by the Pensioners and the serious attacks on the Pensioners as well as the need for formation of this organisation were the topics of discussion in the Conference.


An Office Bearers panel with 41 Comrades was unanimously elected in the Conference with Comrade  R.Muthu former Assistant Circle Secretary P3 FNPO as President; Comrade R.Nagarajan as District Secretary; and Comrade R.Thiagarajan former Treasurer P3 NFPE as the Finance Secretary of the Pondicherry Association.
Various resolutions on Pensioners demands were adopted in the Conference.


Posted by Postal Pensioners at 04:33 No comments:

STATE STEERING COMMITTEE OF AIPRPA MAHARASHTRA STATE FORMED IN A MEETING ON 16.11.2013 HELD AT DADAR MUMBAI 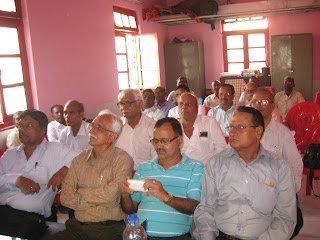 A View of participating Pensioners 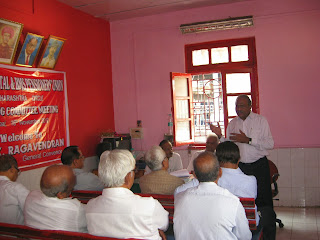 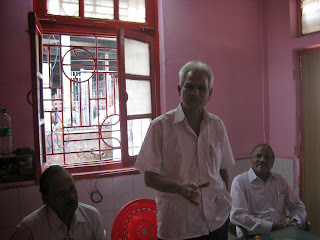 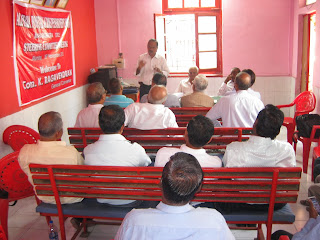 General Convenor K.Ragavendran addressing the meeting
AIPRPA MAHARASHTRA STATE STEERING COMMITTEE FORMED
A meeting of Pensioners was organised at the NRMU [National Railway Mazdoor Union]office at Dadar Railway Station, Mumbai on 16.11.2013 under the Presidentship of senior comrade P.S.Pande. Pensioners from Mumbai Region; Nagpur Region; and Pune Region attended. Chairman of the All India Steering Committee Comrade D.K.Rahate and the General Convenor Comrade K.Ragavendran attended and guided the session. The need for formation of an organisation called the All India Postal & RMS Pensioners Association; the issues of Pensioners; the tasks before the Postal Pensioners in organising a three staged platform of Pensioners movement viz., a strong Postal Pensioners Organisation; a stronger platform of NCCPA [National Coordinating Committee of Pensioners Associations] for uniting all the Pensioners organisations of Central Government Pensioners; and a Confederation of all Pensioners Organisations to fight against the policy offensives of Government against social security and pension were emphasised besides the tasks to be undertaken unitedly by the Pensioners Organisations before the 7th CPC were discussed in the meeting.
The following decisions were unanimously taken:
Posted by Postal Pensioners at 07:00 No comments: