LONG BATTLE BUT BATTLE NOT OVER


The Central Government has ultimately bowed before the verdict of the Apex Court on the matter of fixation of pension for Pre-2006 Pensioners as recommended by the 6th CPC from 1.1.2006. after dilly dallying on this matter for six long years and dragging the pensioners to various courts again and again under different petitions, the orders of the Pension & Pensioners Welfare Ministry has released the orders on 30th July.

As per this order, those pre-2006 pensioners whose pension fixed as on 1.1.2006 shall be as per the recommendation of the 6th CPC and as ordered originally by the Government on 1.9.2008. viz., not less than 50% of the Pay in the pay band plus appropriate Grade Pay. The interpretation given by the Under Secretaries of Government of India later to change the above contention of Pay in Pay Band into Minimum of the Pay Band only had been quashed by the Principal Bench CAT of Delhi but the Government unnecessarily dragged the matter for six long years in the higher  courts of law. At some point of time during the legal battle, sensing the defeat before the Courts, the Governemnt had issued order to correct its mistake from 24-09-2012 instead of from 1.1.2006. After some time the Government issued orders implementing it from 1.1.2006 only for S-29 Scale Pensioners, and not giving it for other pensioners. Now, ultimately, the justice has prevailed on this matter with the release of the following orders of MOP&PW dated 30th July. However, we can see that the decision of the Supreme Court on another issue viz., grant of the same benefit of full pension for Pre-2006 Pensioners retired with less than 33 years of full qualifying service has not been incorporated in this order, leaving further need of legal battles by the  Pre-2006 Pensioners retired with less than 33 years of service. Battle is not yet over for the Pre-2006 Pensioners with less than 33 years of service.

The latest orders are reproduced here: 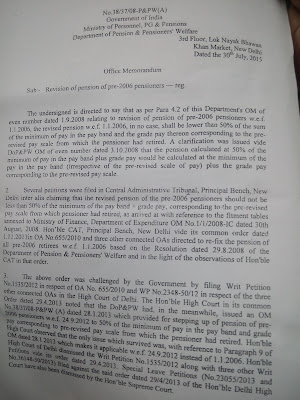 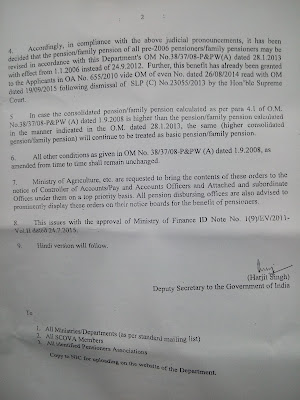 Posted by Postal Pensioners at 22:42 No comments:

Submission of photocopy of Aadhaar Card to Department

All to submit a photocopy of Aadhaar Card to HPOs 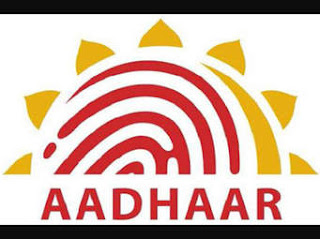 The Department of Posts in line with the decision of the Government of India, has undertaken the task of linking of Aadhaar Card with the PPOs of all the Pensioners. All our members are requested to submit a self-attested photocopy of their Aadhaar Card with their PPO Number written on it to the respective HPOs as early as possible.

K.Ragavendran
General Secretary
Posted by Postal Pensioners at 04:49 No comments:

AIPRPA CHQ is making enquiries to ascertain as to why the Government is delaying issue of orders even after the lapse of four months’ time the Government obtained from the Court. I have requested Comrade KKN Kutty the JCM Standing Committee Member to talk to the concerned Ministry in this regard. However, we are hearing information that the Department of Expenditure has finally agreed for issuing orders for all Pre-2006 Pensioners to fix their pension in accordance with the 6th CPC recommendations as ordered first by the Government on 1.9.2008. However, as of today, no orders have been issued by the Government. All our members are advised to be patient and wait for orders. The minute orders are exhibited in the Ministry of Pension & Pensioners Welfare website it will be flashed to all by the CHQ.
K.Ragavendran


General Secretary
Posted by Postal Pensioners at 04:27 No comments:


The biennial conference of AIPRPA of Kancheepuram District was conducted on 19-07-2015. The Conference was presided over by Comrade A.Mani the Vice President of the District as well as the State Vice President of AIPRPA. Comrade A.Chandran Vice President of the District and the State Organising General Secretary welcomed all. Comrade I.Subramanian District Secretary presented the biennial report and Comrade Senathipathi EkambaramTreasurer presented the Accounts. Elections were unanimous. The Conference was addressed by many leaders including Comrades K.Ragavendran State GS AIPRPA; M.R.Meenakshisundaram, G.Rajamani and M.Chidambaram (All Vice Presidents of State Association); S.Santhanaraman (State Treasurer); C.Sekar (State AGS) and N.B.S.Manian (District Secretary AIPRPA Tiruvellore).
Posted by Postal Pensioners at 01:17 No comments:

17 Pensioners Organisatoins that are affiliated to Tamilnadu State Coordination Committee of Central, State Government and Public Sector Pensioners Organisations under the presidentship of Comrade N.L.Sridharan met in Chennai on 24-07-2015. Comrade A.Sundaram General Secretary of the COC also attended along with leaders of all affiliated organisations including AIPRPA.

The meeting discussed and unanimously decided to organise massive dharna programme in all District Headquarters of Tamilnadu State on 2nd September, 2015 from 10.00 A.M. to 1.00 P.M in support of the All India Strike by the Central Trade Unions and the Confederation of CG Employees as well by all Central Government Employees, State Government Employees and the Public Sector employees like the BSNL, Banks, Insurance etc.

A Pamphlet to be released by the COC of Pensioners Organisations in this regard will be sent to all in Tamilnadu State as soon as the pamphlets are ready. A press release is already sent to the Press by the COC.

Let us make this united programme of all Pensioners Organisations a grand success in Tamilnadu State.  Similar steps may be taken in other States also by our leaders. Anyway the National Convention on 31st July in Hyderabad by the NCCPA will take decisions in this regard.

K.Ragavendran
General Secretary
Posted by Postal Pensioners at 21:08 No comments: 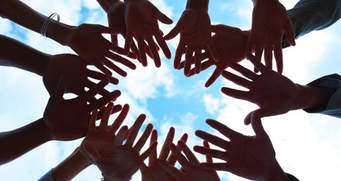 This Strike is against the neo-liberal policies pursued vigorously by the Modi led Central Government to the total detriment of workers and employees. Public Sector institutions are being dismantled. Railways and Defence are being privatised. Postal is being corporatized to lead the way for privatisation. FDI is increased to 49% in Insurance, Banking, Pension Fund etc.  The peasantry is under severe attack through the ordinances to facilitate land grab by the Corporate Houses without any hindrance. Corporates are given a red-carpet welcome in the name of Make In India and to woo the Corporate Houses, the Central Government has aimed to destroy all labour friendly laws including the right to association and collective bargaining.

The Social Security including the Pensionary rights are under serious attack. More than 12 lakhs of new entrants in Central Government Services alone are brought under PFRDA and thus under the ambit of National Pension Scheme controlled by Private Fund Managers. Their social security and pension are under the threat of unknown future. PFRDA further aims to take away the pensionary rights of the employees recruited even earlier to 1.1.2004 and also the existing Pensioners. The neo-liberal policies are attacking and slashing the pension several times in different countries under the austerity measures as in Greece, where the pension was froze at 2009 level without any further increase. The work force in Greece is being axed in tens of thousands as in many other countries. India is not insulated against such dangers as long as the Governments pursue the nefarious neo-liberal policies. The demand of the pensioners of the armed forces for ‘One Rank One Pension’ and the demand of the Civilian Pensioners for a Pension Parity between the past and future pensioners will definitely be a far cry under neo-liberalism.

It is under these circumstances, the entirety of Indian Working Cllass have come together and called for a nationwide one-day strike action on 2nd September, 2015. We, the Pensioners, are part of the common movement against the neo-liberal policies. Therefore pending a final decision of solidarity in the ensuing National Convention of CG Pensioners under the banner of NCCPA to be held at Hyderabad City on 31st July, 2015, the AIPRPA calls for a nationwide mobilisation of Postal and RMS Pensioners at all places in support of the striking working class and the CG Employees. The solidarity can be in the shape of a human chain, or a dharna, or a demonstration, or any other form suitable to local conditions including issue of press releases and pamphlets. Forging hands with other Pensioners Organisations as well as the Confederation and Postal Federations and other organisations of middle class employees will be a step in right direction.

Our AIPRPA leadership at all levels are requested to take necessary initiative to unify all Pensioners Organisations in this direction. The final decision of NCCPA Convention at Hyderabad will guide us more in all our activities towards mobilizing pensioners in solidarity to the striking workers and employees.

Posted by Postal Pensioners at 11:34 No comments: 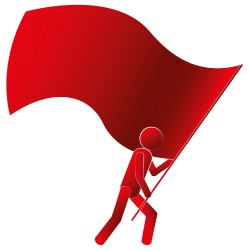 1.        NCCPA NATIONAL CONVENTION WILL BE HELD IN SUNDARAYYA VIGNANA KENDRAM, LOCATED AT BAGH  LINGAMPALLI, HYDERABAD WHICH IS FAMOUS IN HYDERABAD. ANY ONE CAN GUIDE BY REFERING THE NAME OF THE VENUE.

2.      ACCOMODATION FOR STAY OF DELEGATES IS AVILABLE FROM 30TH EVENING FOR STAY.

3.        ACCOMODATION FOR STAY ARRANGED IN THE SAME VENUE IN TWO BIG HALLS. NO COTS ARRANGED. ONLY CARPETS WILL BE ARRANGED.  DELEGATES MAY BRING ONE OR TWO BLANKETS ONLY.

4.        AS WEATHER IS NORMAL, LIGHT CLOTHING IS SUFFICIENT. NO NEED FOR WINTER CLOTHING.

5.        THERE MAY BE RAIN.  PLEASE BRING UMBERELLA, IF ANYONE WANTS TO GO OUT SIDE.OTHERWISE UMBRELLAS ARE NOT NESCERRY AS ENTIRE ACCOMODATION, CONVENTION HALL AND DINING IS WITHIN THE SAME PREMISES.

(a) KACHEGUDA STATION: Kacheguda Railway Station is nearest to the venue.  IF ANY BODY COMING TO THAT STATION CAN REACH THE PLACE BY AUTO IN 10 MTS. THEY WILL CHARGE MAXIMUM 40/- FOR AUTO IN WHICH THREE CAN TRAVEL.

(b) SECUNDERABAD STATION: Those who reach Secunderabad Station CAN COME BY AUTO. Autowalas WILL CHARGE MAXIMUM 75/- FOR AUTO. FREQUENT CITY BUSSES ARE ALSO AVILABLE FROM SECUNDERABAD STATION.  CITY BUS  NO. 2 WILL STOP BEFORE THE VENUE. CHARGE WILL BE RS. 10/- FOR EACH PERSON AND TAKE MAXIMUM 30 MINUTES TIME FOR TRAVEL.

C] HYDERABAD STATION:  Delegates who reach Hyderabad Station CAN COME BY AUTO. Autowalas WILL CHARGE MAXIMUM RS.75/-TO RS. 100/- TO THE VENUE. THREE CAN COME IN ONE AUTO. CITY BUS NO. 136 WILL BE FROM HYDERABAD STATION . FREQUENCY IS 15 MTS. FARE WILL BE RS. 10/-.

Comrade Y.Naghabhushanam will be incharge of our AIPRPA Delegates and all Delegates are requested to keep in touch with him for any assistance or guidance required to them.


AADHAAR BASED AUTHENTIFICATION OF LIFE CERTIFICATE FOR PENSIONERS 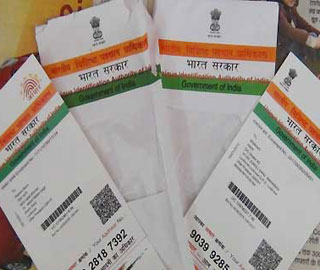 Minutes of the meeting held on 3rd June, 2015 for review of status of Aadhaar based authentication of Life Certificate for pensioners is available in the Pensioners Welfare website. You can also read it by copying and pasting the  the undermentioned URL:

Posted by Postal Pensioners at 12:14 No comments: