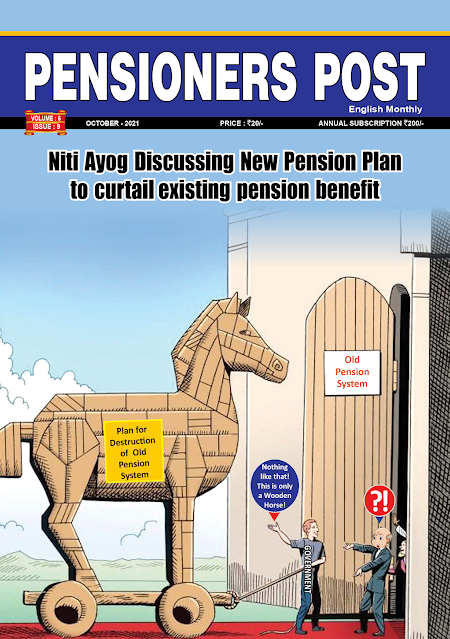 The October issue of Pensioners Post is under print. The front wrapper picture of Trojan Horse explains the danger to the OPS. The important articles in the issue are about Karnataka Webinar of GS on TUI Call on 1st October; Comrade KKN Kutty’s webinar on CGHS; Clarifications on 6.9.2021 OM on MACP; DoP’s attack on TU Rights; Pensioners Mirror; Photos of mobilisation of pensioners at the call of TUI (P&R) etc. – KR Editor Pensioners Post -

Posted by Postal Pensioners at 23:13 No comments:

Statement of WFTU on the International Day against Poverty – 17 October 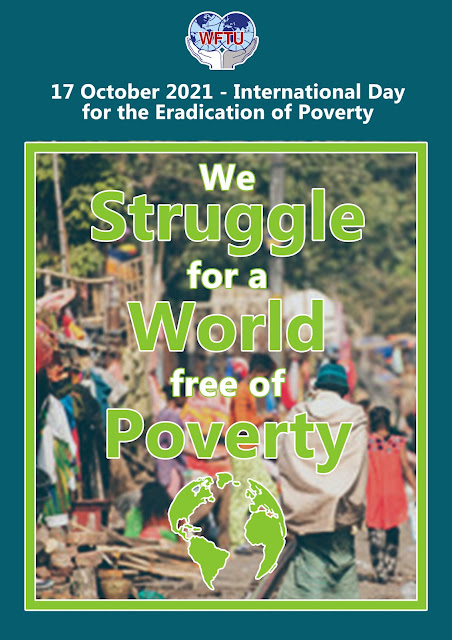 • The bottom half of the world’s population owns the same as the richest 85 people in the world.

• Seven out of ten people live in countries where economic inequalities have increased over the last three decades.

• The richest 1% increased their share of income in 24 out of 26 countries.

These were some of the findings revealed a few years ago. The inequalities under the capitalist system of development world over has been causing and multiplying the number of those subjected to poverty and suffering untold miseries.

A research finding of the ILO (International Labour Organisation) revealed that half of the workers in the world are not earning enough to lift themselves and their families over the US $ 2 day poverty line. The obvious result is” Greeds of the rich met and Needs of the poor not met “‘ The increasing number of ” working poor ” is inevitably the result of the capitalist path of development. WFTU’s clarion call is against their lop-sided developments.

Major crises have major consequences. Earlier, the threat of Great Depression spurred isolationism, nationalism, facism. The Pandemic affected the poor, middle class, workers and their livelihoods. Countries with dysfunctional states, polarised societies or poor leadership have done badly leaving their citizens and economies exposed and vulnerable. Resultantly poverty increased. Only large companies with deep pockets were able to ride out the storm, with the technology giants gaining most of all as digital interactions became even more important. WFTU’s declared policy opposes this.

The Covid -19 Pandemic right-wing populism, and rising authoritarianism have changed the world for the worse, millions are unemployed. Many face malnutrition. Countries and young unemployed persons all have been disproportionately affected. Deeper social transformation will require organising and mobilising. This has been the call of WFTU constantly in all continents.

The so-called poverty alleviation programme and poverty reduction programmes in many countries remained in paper. More inclusive social protection and sustainable development, adequate and need based food security and income security are needed. The needs of the most vulnerable people, youth workers, migrants, informal sector workers etc to be fought on class-based struggles, WFTU declares.

The climate crisis is a global crisis that exacerbates inequality across countries and within societies. A failure to address the climate crises will impact food security, water supply and the livelihoods of millions of vulnerable workers.

This is thus a social justice issue and a workers organising issue also. We need to build activism in the workers unions and wherever possible build alliances with other progressive social movements.

Migrant labour has been a feature of the development of capitalist economies for several years. The regimes and employer practices have made migrant workers vulnerable. Trade unions have to play a key part in protecting these workers. WFTU’s program had always included the upliftment of migrant workers.

More than 40 % of countries in the world lack full democracy and contribute to substantial economies and political injustice. It is necessary to build transnational solidarity with them. They are denied freedom of Association, Right to organising and collective bargaining. These are paths leading to enormous increase in poverty. In these cases Government is not the solution to our problem. But the Government is the problem; Hence mobilising the people against such retrograde Governments is immense and inevitable. Our class operated organisations should be in the forefront of the struggles

WFTU continues its war against poverty ; Needs of the poor and proletariat will have to be met by all means. Sustained struggles change such governments whose policies perpetuate poverty. We renew our call to the world working class and the Toiling masses to stand as one giant force to eliminate poverty. Struggle, continuous struggle and militant struggles to eliminate poverty and eliminate such programa of the capitalists and Governments which exploit man by man and urge upon the world bodies of the United Nations, International labour Organisation to strive towards achieving Eradication of poverty.

This is the link of the Facebook page of CG Coordination Committee, West Bengal, for the listeners. Today's program of Webinar of NFPE will be broadcast live here:

Posted by Postal Pensioners at 05:30 No comments: 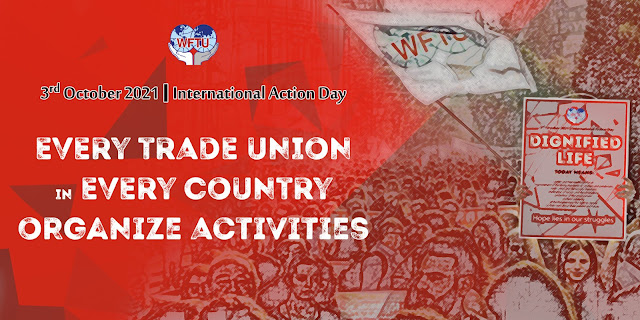 Today is the 76th year of birth of the World Federation of Trade Unions. WFTU is a class conscious and militant trade union centre functioning in all continents of the world. TUI (P&R) is one of its wings. WFTU has formed sectoral Trade Union International bodies. Every year the foundation day of WFTU is observed world wide and this year 2021 is being observed with the call "Dignified Life for workers and the peoples around the world".
AIPRPA CHQ calls upon all our States / Districts / Divisions / and Members to join in solidarity with Trade Unions to strengthen the programmes organised by various trade unions - KR GS AIPRPA-
Posted by Postal Pensioners at 20:21 No comments:

Due
congratulations
to all comrades who bravely organised programmes in Districts on 1st October at the call of TUI!
It was seen and comrades deserve high appreciations who bravely organized programmes of Street Demonstrations, Hall meetings, Gatherings, Webinars or Seminars as per local conditions.
Photos placed in groups were collected and selective photos were forwarded to TUI (P&R) also. However, Districts who could not plàce photos on 1.10.2021 are requested to post them so that these photos also can be sent to our International Body.
CHQ may not be wrong to request those States and Districts to inform the reasons of their inability to organize any programmes. Especially in the background that propaganda about the importance of the DAY was being made repeatedly through social medias by the CHQ for weeks if not months! -
CHQ is placing the selected photos received from various places.
- KR GS AIPRPA-


Posted by Postal Pensioners at 20:15 No comments: