After a long time a strike ends with the major demand implemented!

Success is due to 'Unity of GDS Unions & their united struggle'!

The indefinite strike of GDS that lasted for 16 days has culminated in total success. The strike has ended many speculations and also the myth that Modi Government cannot be pressurized. But the underlined fact is that this unprecedented success is only due to the sheer determination of GDS masses and the unwavering unity of GDS leadership of all unions. United struggles with determination will never fail. This unplanned and not preplanned unity of all major GDS unions shall be carried forward in future too to record united struggles in spite of organisational separation. All should learn that what the individual efforts could not win, the collective attempt (though independently synchronized) has brought the success! This lesson shall not be undermined.

As far as the Press release is concerned, we could understand:

1) 2.57 fitment formula is applied from 1.1.2016 as recommended by Kamlesh Chandra Committee. This is on par with all regular Central Government employees, who were also given 2.57 fitment  benefit under 7th CPC. The basic TRCA as on 1.1.2016 will be multiplied by 2.57 to fix the revised wages and arrears paid in one installment.

2) The major recommendation of Kamlesh Chandra to prospectively fix the minimum work hours as 4 Hours instead of 3 Hours as at present stands accepted by Cabinet. We were apprehending that this particular recommendation may be rejected by Government. But the acceptance of minimum 4 hours work and TRCA accordingly from current date, will help thousands of GDS in 3 hours bracket to get good increase in salary.

3) The acceptance of the good  recommendation for a new Risk and Hardship Allowance is very positive. All GDS will get a jump in salary.

4) Continuation of DA as at present will protect the GDS as like regular staff to fight inflation.

5) Fixing Bonus @ 7000/- is according to Kamlesh Chandra recommendation. Even then, this continues the discrimination between the regular and GDS. The anology of fixing a reduced notional pay of 7000/- is basically wrong. The movement shall continue to struggle in future to remedy.

6) Rationalization of 11 TRCA scales into only 3 TRCA slabs and categorizing all GDS as "BPM or Assistant BPM or Dak Sewaks" is done as recommended by the GDS Committee.

7) It is estimated that the acceptance of Kamlesh Chandra recommendations will result in 860.95 crores non-recurring  expenditure (one time expenses) and 396.80 crores recurring expenditure during 2018-19.

8) On the face of it, the Kamlesh Chandra Committee's positive recommendations seem to have been accepted by Government without much alterations. Let us reach conclusions after seeing all the impending orders. The CHQs will be giving more details shortly, no doubt!

Basically, it is a great victory to rejoice by all especially the militant Gramin Dak Sewaks!

K.Ragavendran GS AIPRPA
Posted by Postal Pensioners at 07:51 No comments: 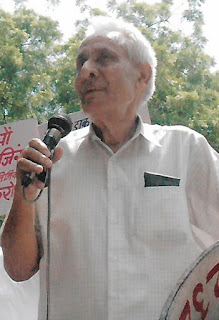 Com. G.L. Dhar, Secretary AITUC, former Secretary General Central Secretariat employees and popular veteran trade union leader of CG employees movement has breathed his last. This nanogenarian leader ( 92 years old) was very popular in Delhi and had conducted historical struggles  for the cause of working class. Workers called him “Lion of the Delhi” with love. AIPRPA CHQ dips our banner in honor and memory of this departed leader. - KR GS AIPRPA
Posted by Postal Pensioners at 03:58 No comments: