Gujarat within our AIPRPA map now!

The first and foundation State Conference of AIPRPA Gujarat State is successfully held today (18.02.2018) at Rajkot City. Rajkot City has earned the right to host the State Conference after establishing a total membership of 450 within two-three months of formation of Gujarat State Steering Committee. The Conference is presided by Comrade Atul Sheth the General Convener of State. The Divisional Secretary Rajkot comrade L.K Chavda has anchored the proceedings. Comrade Taraiah (P4 CHQ OGS) is the advisor and facilitator of all organisational work of taking the initiative to found AIPRPA at Gujarat.

Respected Postmaster General Rajkot Region Shri. B.P.Sarangi attended as our tea.f Guest and greeted our efforts and assured full help in attending to the problems of pensioners.

Comrade K.Ragavendran GS AIPRPA addressed at length on organisational task and on various issues of pensioners. He also explained the successful efforts of AIPRPA since its formation in 2014 to register noteworthy advancement on certain important issues of postal pensioners.

Already Divisional branches have been formed in Rajkot, Ahmedabad, Jamnagar, Gondal and Nadiad. All work is completed for founding of Divisional Association at Junagadh very shortly. Plans to form Associations in the remaining  divisions are being planned. It is really an encouraging factor that systematic organisational work is being undertaken within a short span of three months and CHQ quota for full membership of Rajkot, Ahmedabad, Jamnagar and Gondal are remitted together with enrollment fee. The enthusiasm and spirit of Gujarat Comrades was fully evident in the Conference. Many serving employees fully helped the infrastructure arrangements.

The Conference unanimously elected a set of office bearers with Comrade S.T.Taraiah as Patron; Comrades L.K.Chavda as State President; Atul Sheth as State General Secretary; and R.L.Dave as Treasurer.

- KR GS AIPRPA
Posted by Postal Pensioners at 05:54 No comments:


The 3rd State Conference of AIPRPA Tamilnadu is organized at Chennai City on 21-22, February, 2018. The Conference will be held at "Patron Comrade A.G.Pasupathy Arangam" at "World University Service Centre" Chetput, Chennai - 600031. The Invitation showing the VIPs / Speakers attending the Conference as well as the Subjects Committee Programme is furnished below.

Attention to Delegates and Visitors attending the State Conference:

1. Delegates arriving at Bus in CMBT Bus Station are requested to take the City Bus No.27B from the Bus Station and take ticket to "Presidency Girls Higher Secondary School" or "PT School" in short. WUS Centre is just nearby building. PT School is at the beginning of Egmore High Road. Get down and walk back twenty steps to the venue. Volunteers & Reception Committee Comrades will be there to take care of the rest.

2. Delegates arriving at Chennai Central Railway Station - are requested to go to the RMS Office at the entrance gate of Suburban Train Platform building. Our Volunteers and Reception Committee Comrades as well as RMS Comrades will guide them to reach the earmarked accommodation. A Van is arranged to pick up Delegates from Railway Station to the Accommodation. Contact Persons at Central: Comrade R.Santhanam (AGS R4 CHQ) [Mobile No: 9444711693] and Comrade M.D.Veeraraghavalu  (Ex-D/S R3 Chennai Sorting) [Mobile No. 9445741331] 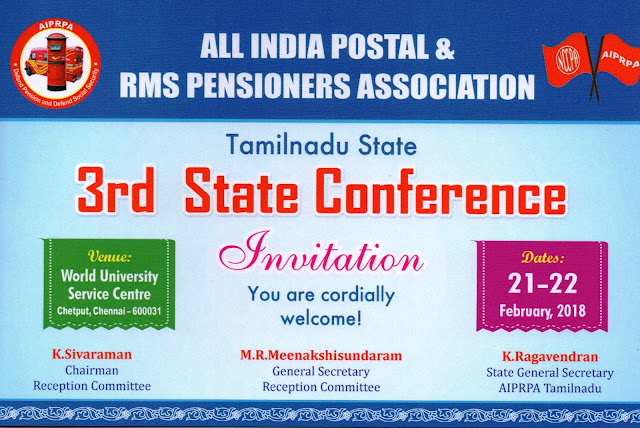 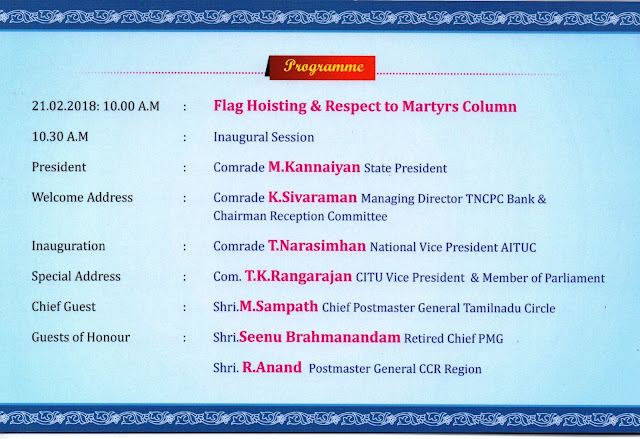 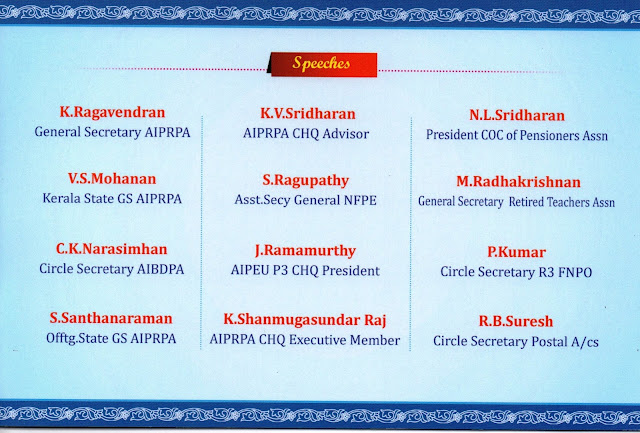 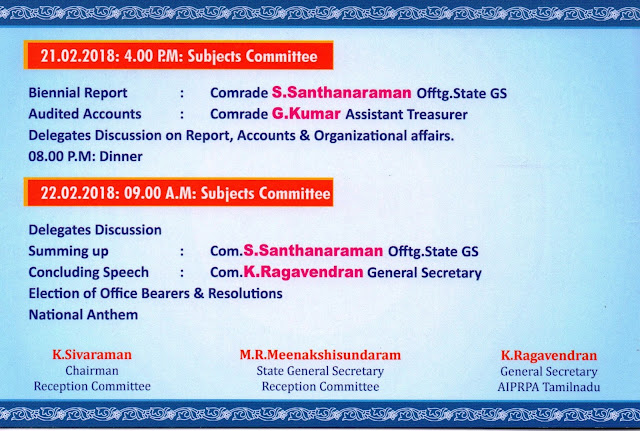 Posted by Postal Pensioners at 19:19 No comments: 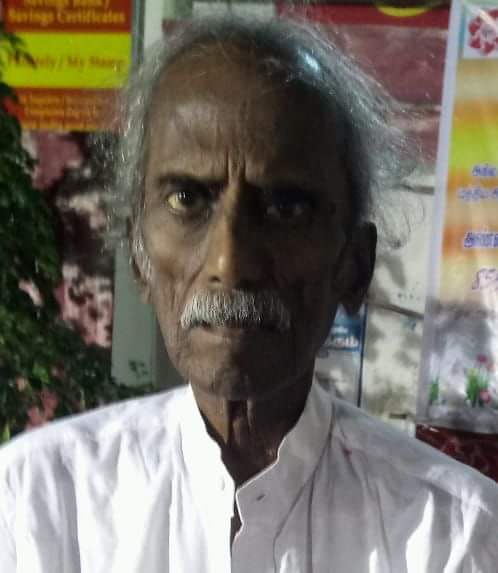 It is the saddest news to our ears. The veteran octogenarian leader of CG movement and Patron of AIPRPA Tamilnadu State comrade A.G.Pasupathy has passed away yesterday night at 10.00 P.M. He had reportedly experienced some breathing problem and stopped breathing. A great leader with unparalleled qualities of bravery and struggles is no more. Despite his age of 85 and physical illnesses, his indomitable spirit in attending all our meetings and struggles up to our Vijayawada AIC was stupendous! There is no proper words to express our deep sorrow and the loss is quite irreparable to our entire movement. The funeral is at 4.00 P.M today evening from his residence at Guduvancheri. AIPRPA dips its banner and lower its flag to honour the departed leader comrade AGP!
- K.Ragavendran GS

Posted by Postal Pensioners at 19:49 No comments: