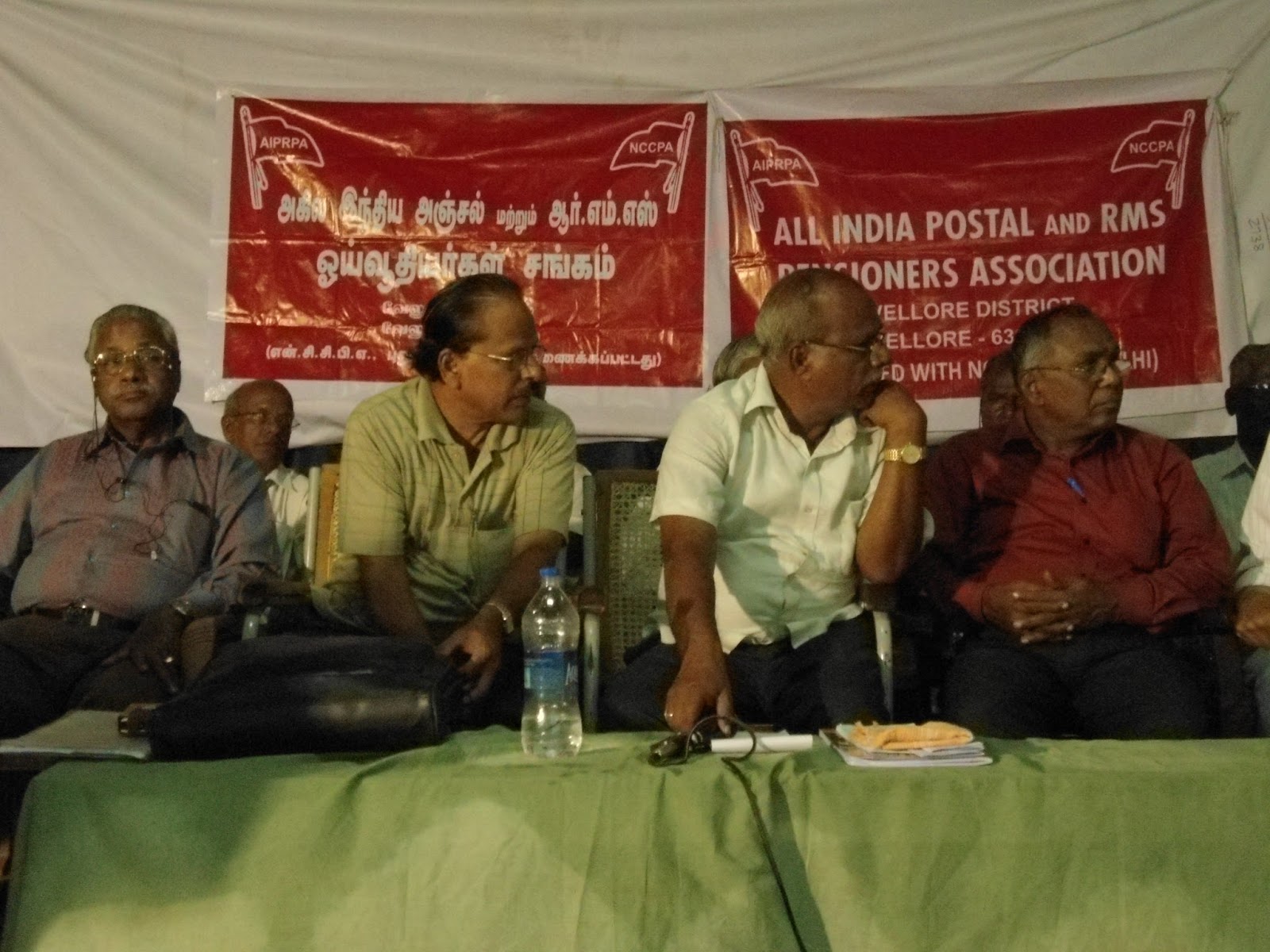 
In a special meeting organised under the chairmanship of State President of AIPRPA Comrade M.Kannaiyan by the Vellore District AIPRPA the Reception Committee to host the 1st All India Conference of AIPRPA has been formed.


Leaders of State AIPRPA and several sister Pensioners Organisations from State Government, Electricity Board, BSNL-DOT and even from Central Trade Unions and Confederation and Postal and Telecom Unions / Associations of Vellore District attended the meeting and extended total cooperation to the All India Conference.


The State Working Committee of AIPRPA that met earlier on 25.03.2014 had welcomed the decision of the All India Steering Committee to hold the AIC at Vellore in Tamilnadu State and decided to constitute a broad-based Reception Committee to successfully conduct the AIC with maximum convenience to the Delegates and Visitors attending the AIC on 19-20 July, 2014. Vellore is a historical city very nearer to Chennai City with great conveyance facilities by train and bus and just with 2 ½ to 3 hours travel. The historical fort called the Vellore Fort is situated in the heart of the town. The Golden Temple of Sripuram in Vellore is the latest tourist attraction for both devotees and tourists. The  neighbouring district Thiruvannamalai boasts the presence of Sri Arunachaleswaran Temple. Vellore is also famous for the presence of the world famous CMC Hospital. The trade unions in Vellore are strong and active and naturally the AIPRPA is one of the strongest in Tamilnadu State. This town is eagerly waiting to host the 1st AIC in a befitting manner.


Vellore comrades have approached the Chairman of the renowned national famous educational institution at Vellore called the Vellore Institute of Technology University who gladly agreed to provide his son Sri.G.V.Selvam the Vice President of the VIT University to be the Chairman of the Reception Committee. The involvement of the prestigious VIT University and its influential leaders heading our Reception Committee gives us immense pleasure and strength.


The  Reception Committee has been formed as follows:

The Reception Committee has printed donation tickets with 100/-; 200/-; and 500/- denomination. As per the decision of State Working Committee a donation of 100/- from all members of our Association in all districts in Tamilnadu shall be collected. The members of Vellore District as the host of the AIC will be approached for 200/- donation per member. In addition 200/- and 500/- donation will be taken to members of public for donation. An advertisement tariff has been  printed for the purpose of Souvenir.

The State Conference of Odisha State is fixed on 17.05.2014. The State Conference of Andhra is reported to be organised immediately after the elections in that State. All other States where State Conference has not taken place should take all steps for holding it after the General Elections as decided in the meeting of All India Steering Committee. No State should lag behind in forming the State Association before the AIC at Vellore in July, 2014.  All Districts / Divisions in all States should send delegates @ one delegate per 25 members to the AIC.

Detailed Circular from the Reception Committee about various issues will be issued shortly.


Posted by Postal Pensioners at 06:30 No comments:

The Orders for payment of additional DR 10%  to Pensioners and Family Penioners has been released by the Department of Pension & Pensioners Welfare.

The orders are reproduced below:

The undersigned is directed to refer to this Department's OM No. 42/13/2012- P&PW(G) dated 3rd Oct, 2013 on the subject mentioned above and to state that the President is pleased to decide that the Dearness Relief (DR) payable to Central Government pensioners/family pensioners shall be enhanced from the existing rate of 90 % to 100% w.e.f. pt Jan, 2014.

3. Central Government Employees who had drawn lump sum amount on absorption in a PSU/Autonomous body and have become eligible to restoration of 1/3rd commuted portion of pension as well as revision of the restored amount in terms of this Department's OM No. 4/59/97-P&PW (D) dated 14.07.1998 will also be entitled to the payment of DR @ 100% w.e.f. 1.1.2014 on full pension i.e. the revised pension which the absorbed employee would have received on the date of restoration had he not drawn lump sum payment on absorption and Dearness Pension subject to fulfillment of the conditions laid down in para 5 of the a.M. dated 14.07.98. In this connection, instructions contained in this Department's OM NoA/29/99-P&PW (D) dated. 12.7.2000 refer.

4. Payment of DR involving a fraction of a rupee shall be rounded off to the next higher rupee.

5. Other provisions governing grant of DR in respect of employed family pensioners and re-employed Central Government Pensioners will be regulated in accordance with the provisions contained in this Department's OM No. 45/73/97-P&PW (G) dated 2.7.1999 as amended vide this Department's OM No. F. No. 38/88/2008-P&PW(G) dated 9th July, 2009. The provisions relating to regulation of DR where a pensioner is in receipt of more than one pension, will remain unchanged.

6. In the case of retired Judges of the Supreme Court and High Courts, necessary orders will be issued by the Department of Justice separately.

7. It will be the responsibility of the pension disbursing authorities, including the nationalized banks, etc. to calculate the quantum of DR payable in each individual case.

8. The offices of Accountant General and Authorised Public Sector Banks are requested to arrange payment of relief to pensioners etc. on the basis of these instructions without waiting for any further instructions from the Comptroller and Auditor General of India and the Reserve Bank of India in view of letter No. 528-TA, II/34-80-II dated 23/04/1981 of the Comptroller and Auditor General of India addressed to all Accountant Generals and Reserve Bank of India Circular No. GANB No. 2958/GA-64 (ii) (CGL)/81 dated the 21st May, 1981 addressed to State Bank of India and its subsidiaries and all Nationalised Banks.

9. In their application to the pensioners/family pensioners belonging to Indian Audit and Accounts Department, these orders issue after consultation with the C&AG.

Under Secretary to the Government of India

Please visit this Department's website http://pensionersportal.gov.in for the orders on pension matters including above orders.

Posted by Postal Pensioners at 03:19 No comments:

EMAIL SENT TODAY (8.4.2014) TO THE DEPUTY SECRETARY OF PENSION & PENSIONERS WELFARE BY OUR CHQ REQUESTING EXPEDITING OF DEARNESS RELIEF ORDERS:

Sub: Request for expediting release of DR orders - regarding

There seems to be an unusual delay in the release of Dearness Relief Orders for Pensioners w.e.f. 1.1.2014 even though the orders of the Finance Ministry for payment of DA to regular Central Government Employees had been released and endorsed by several Departments for payment. Normally in quick succession the orders from the Ministry of Pensioners Welfare used to be released after the approval orders of the Ministry of Finance. This time that has not happened.

The Pensioners being the lesser privileged sections, the delay is causing much strain on them.

It is kindly requested that the matter may kindly be looked into and necessary orders for payment of DR to Pensioners may be caused to be expedited.

Posted by Postal Pensioners at 05:55 No comments: