The Central Government though under pressure announced its decision to constitute 7th CPC has not come forward to accept the genuine demands of the Staff Side for finalising the terms of reference. The discussion took place between the Official and Staff Side on terms of reference seems to be an eyewash and the real intention of the Government is not to address the real concerns of the CG Employees and Pensioners like DA Merger; Date of Effect from 1.1.2004; Interim Relief; Inclusion of GDS for 7th CPC review; Rescinding of PFRDA etc. The Government wants to just unilaterally finalise the terms of reference to suit its neo-liberal agenda. The National Executive of Confederation has come to the conclusion that unless there is continuous pressure the terms of reference may not be to the advantage of staff.

A two day strike call from 12th to 13th February, 2014 has been decided by the Confederation in this background. The All India Steering Committee of AIPRPA will extend total solidarity to the agitation of Confederation. All the State Associations / State Steering Committees / District / Divisional Associations are called upon to organise solidarity demonstrations in support of the strike action on 12.02.2014. The demonstration will be in support of the Striking Central Government Employees as well as demanding the Central Government to include the issue of "Maintaining total parity between the past, present, and future pensioners" in the purview of 7th CPC's terms of reference.

HOLD DEMONSTRATIONS BY MOBILIZING POSTAL & RMS PENSIONERS IN FRONT OF CIRCLE OFFICE / REGIONAL OFFICE / DIVISIONAL OFFICE UNDER THE BANNER OF AIPRPA AND  SEND THE FOLLOWING  E-POST TO HON'BLE PRIME MINISTER OF INDIA:

Posted by Postal Pensioners at 23:38 No comments:


Govt to revise rates for

In a good news for lakhs of beneficiaries under the Central Government Health Scheme (CGHS), the Government is in the process of revising the rates of medical procedures offered by empanelled hospitals and diagnostic centres and giving them early payment assurance to encourage more medical institutions join the scheme.

The Ministry of Health and Family Welfare has floated e-tenders for empanelment of hospitals and decided that the rates of various medical procedures would be fixed by an average of rates quoted in e-tenders instead of the old system where the lowest quotation became the rate.

Rates of all medical procedure centres under CGHS would be revised by April next year.

Not just that, the Government is also revising its policy by providing empanelled hospitals assured upfront payment of 70 per cent of the total bill within five days of its presentation and balance admissible amount within a maximum period of 30 days.

The direction for a 10 per cent deduction in case of early/cash payment to hospitals under CGHS has also been done away with, highly-placed sources in the Ministry told PTI.

"These measures will put an end to the problems of delayed payments which discourage hospitals from getting empanelled under the scheme," a Health Ministry official said.

Under the new policy finalised by the Ministry, the category of super specialty hospitals empanelled under the CGHS has also been done away with.

"Now, hospitals, exclusive eye hospitals/centres, exclusive dental clinics and diagnostic centres shall be empanelled for all facilities available in the health care organisation as approved by National Accreditation Board for Hospitals/National Accreditation Board for Labs and the Quality Council of India and shall not be empanelled for selected specialities/facilities," the new policy says.

The changes will help rope in more hospitals, clinics and diagnostic centres under the CGHS as many renowned and big hospitals were shying away from being empanelled under the scheme due to pending payments and low rates for medical procedures.

Sources said payments of bills amounting to around Rs 100 crore of private hospitals are pending with the government under CGHS alone, even though hospitals are crying hoarse that pending payments are to the tune of over Rs 400 crore.

Officials, however, say this huge amount is not pending under CGHS and it may include payments under ECHS, ESI and health bills of other big departments like Delhi Police and others.

VOICE OF PENSIONERS BEFORE CENTRAL GOVERNMENT

at Jantar Mantar in

All other States
ONE DELEGATE FROM EACH DISTRICT

Climate in February end will be pleasant in Delhi
Accommodation for stay on 24.02.2014 is being arranged for AIPRPA Delegates by CHQ

Let the Pensioners Voice be heard by the Central Government!
Let our Demands be focussed effectively at the time of Parliament Session!!


Posted by Postal Pensioners at 22:31 No comments:

Department of Pension & Pensioners Welfare issued orders for grant of Family Pension under NPS on 5.5.2009
Finance Ministry Department of expenditure also issued the orders on 2.7.2009
Department of Posts not implemented these orders in Postal
P3 NFPE General Secretary wrote on our behalf to DOP


The CHQ as well as the State Organisation of AIPRPA was brought to the knowledge that due to the non-issuance of endorsement orders by the Directorate of Postal Department, no family pension was granted to the spouses of the deceased postal employees covered under New Pension Scheme [now renamed as National Pension Scheme]. The suffering people complaint prompted the AIPRPA to seek intervention at the DOP level through the NFPE. As per our request the General Secretary NFPE P3 Union has written to the Secretary Department of Posts to take action immediately in this matter. The AIPRPA thanks the General Secretary P3 NFPE as well as the Secretary General NFPE Comrade M.Krishnan for  his kind intervention in this urgent matter. The copy of the letter written by General Secretary P3 is placed hereunder for the information of all. If any such case of denial of family pension to the spouses of deceased postal employees under NPS are noted in any circles, the cases may pl be brought to the notice of the CHQ for intervention. 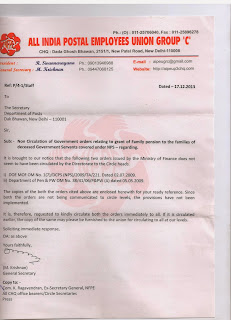