Let us liberally donate to Government to fight Corona! 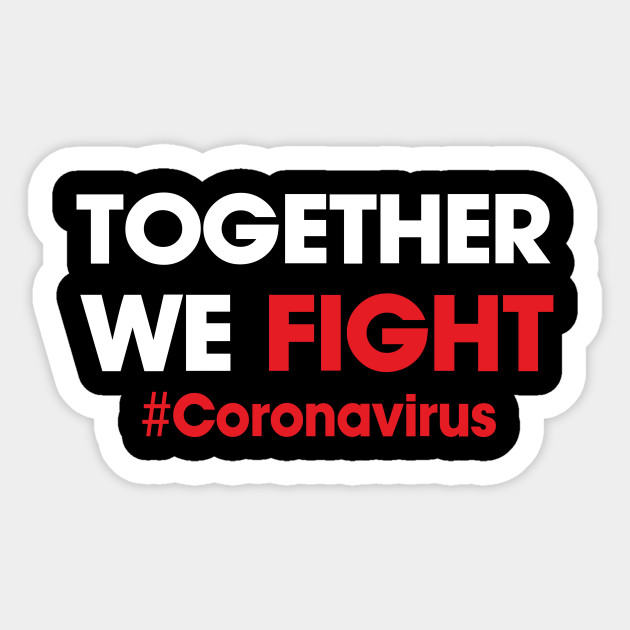 The spread of Corona has already threatened our life and economy. The Central and State Governments as well as the Warriors against Corona are fighting the war. Appeals have been given by the Honourable Prime Minister and many Chief Ministers. Some States have expressed fear about their financial condition.

It is our duty to respond to the call. We have a basic responsibility to the society. When the nation is waging a war for our survival, we the senior citizens cannot remain mute spectators.

AIPRPA CHQ is calling upon all our organisational leaders and State/District Associations to organize effective 'online' remittances to the Government Funds. Without disturbing the lock down instructions we have to act. So the best method will be to online transfer the donations by members and District/State Associations. The CHQ will donate to Prime Minister Fund in pmcares@sbi and the State/Districts/Divisions/Members either to PM Fund to respective State Chief Ministers Relief Funds.

CHQ will contribute a sum of Rupees 25,000 to pmcares@sbi in response to the call by Prime Minister. This transfer will be done by CHQ Treasurer from Delhi from the CHQ funds.

All States and Districts are called upon to organize donations accordingly. They may call the members to directly online transfer their donations also if the technology is known to members. If they decide, they can decide their methods. But every State and District / Divisions should play their due role in this time of national and international crisis.

Our donations are part of our share of fight against corona along with Governments.
- KR GS AIPRPA-
Posted by Postal Pensioners at 20:59 No comments:

CGHS Beneficiaries advised not to go to Dispensaries!

Due to Social Distancing all beneficiaries are requested by Government to purchase medicines from medical shops based on CGHS old prescriptions up to 30.04.2020.

They can submit the bill in the dispensary later for reimbursement.

The GO is as under: 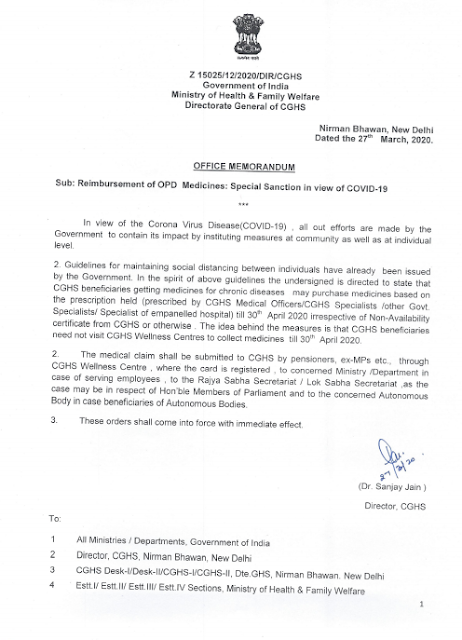 Posted by Postal Pensioners at 07:41 No comments:

Your Communication has been Registered
Click Here To Continue
Your Registration Number is : PMOPG/E/2020/0245258
The Prime Minister was addressed by the AIPRPA General Secretary on the following problem as brought by the District Secretary of AIPRPA Salem District in Tamilnadu today. The communication to the Prime Minister has been registered and acknowledge received as “Your Communication has been registered with registration number PMOPG/E/2020/0245258 . Please visit at : https://pgportal.gov.in and click on 'View Status' for further details. Please quote the registration number in your future correspondence”.
The letter on the problem sent to Prime Minister is as follows:
We appreciate the hectic efforts of Central and State Governments in fighting corona. We also appreciate the Government's offer of 1000/- to senior citizens and free supply of ration to poor. We are forced to bring a peculiar problem at this hour for causing appropriate orders. Most of pensioners have ATM cards in banks and Post Offices. But there are hundreds of pensioners without ATM cards. They have to go to a post office for drawing pension on 31st March. Social distancing and other procedures are also there to be followed. But Police permission and other restrictions during lock out period is definitely our concern. Without pension, the senior citizens will be under heavy stress. A way out is needed.
Kindly take appropriate decision and cause instructions.
Yours faithfully
K.Ragavendran
General Secretary All India Postal and RMSPensioners Association.


Posted by Postal Pensioners at 06:00 No comments:

Not to cause panic! But to be prepared for the worst tomorrow! All members of AIPRPA please take protection by self isolation in houses!

The Corona started its spread in India. The outcome may be very fearsome. Thousands may die due to lack of medical facilities. A report by "The Print" is alarming. Most of us don't understand yet about the dangers! Gear up for necessary steps for protection. Only prevention can protect us, not the cure! The link to the online media 'The Print' is given below for all to study and take all important precautions - KR GS AIPRPA 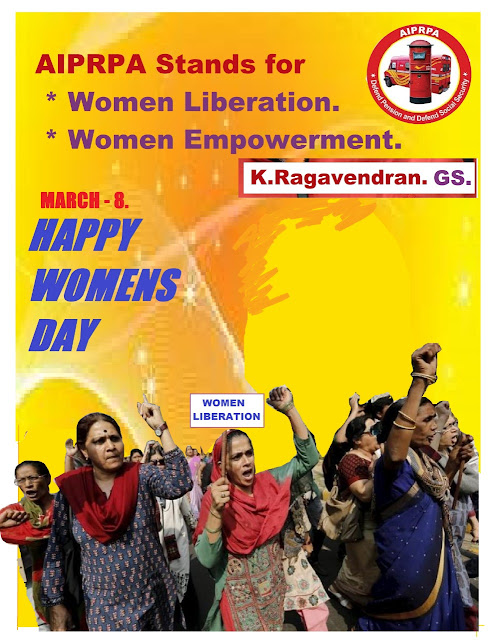 Comrades! The increasing education among the women and the growing employment of women is increasing the awareness of women folk. But these have not ended the gender discrimination and exploitation of women! Neither the attacks on the modesty of women has decreased. Number of Nirbayas and Uma Maheswaris are definitely on the increase. New technologies are harsh on women and girl children! No Government could enact Women Bill in Parliament because they don't want the empowerment of women. AIPRPA stands for total women liberation! AIPRPA stands for real empowerment of women! AIPRPA stands against any discrimination on gender basis! We believe that only through uncompromising struggles, the women can achieve these goals! AIPRPA stands with them in their just battle! - KR GS AIPRPA
Posted by Postal Pensioners at 05:05 No comments: 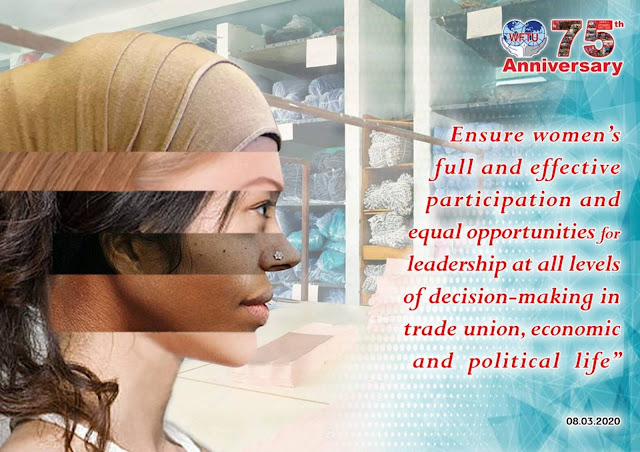 On the occasion of this year’s March 8th anniversary, the World Federation of Trade Union addresses a warm militant greeting to every woman all over the globe, working or unemployed, self-employed, in the city or in the countryside, young mother, student, retiree, refugee or immigrant, life fighters of the everyday.
We all, stand on the side of the women who struggle with the WFTU and the international class-oriented movement, and strongly believe in the necessity of the organization of the women’s fight for real equality and do not limit our militancy and struggles just in one day a year.
2020 is the year that marks the 75th anniversary of the World Federation of Trade Unions’ struggle and action since its founding in 1945. 75 years in which we are constantly fighting for the true equality of women, for a system that will free them from the double repression of their gender and class, for a system without man-to-man exploitation.
In this struggle, men of our class are our allies, with whom we walk side by side in social and political action, claiming a life as we deserve, for us and our families: without wars and refugees, with constant and full-time work, with decent salaries and full insurance rights, with state infrastructures providing free public health, education, social welfare for all.
International Women Day is a symbol of struggle, sanctioned with the suggestion of socialist Clara Zetkin in 1911. It is a day dedicated to the strike of the New York women garment workers in 1857, demanding equal pay with their male colleagues, reduced working hours and human working conditions, and stood up to their employers and their state.
However today, 163 years later, all these are still demanded. Job intensification has increased, flexible forms of work tend to become the norm, in many countries women are still paid less than their male colleagues for the same job.
But not only that. Today, in 2020, with such development in science and technology, women still die during childbirth, due to lack of medical care, they do not go to school because of their gender, become victims of trafficking and are forced into prostitution, are drowning in the sea with their children in their arms, trying to avoid the bombs.
We, as the World Federation of Trade Unions, reject all policies aim to serve the large multinationals in order to continually increase their profits. This is the real reason behind every war, every anti-insurance law, every cut in wages and benefits, the shrinking of the social state. And finally, this is the real causality of inequality of the woman in every expression.
We believe that the best way to honor International Women’s Day is to continue our struggles against these policies and their perpetrators. Until the complete emancipation of every woman in every corner of the planet.
We will not stop until we do it!
Posted by Postal Pensioners at 17:51 No comments: