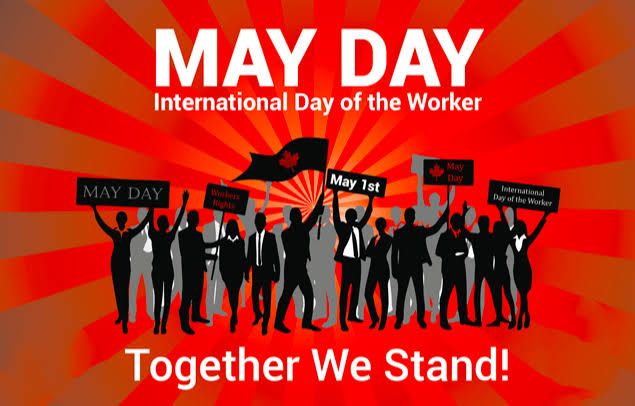 AIPRPA expresses its revolutionary greetings to all on this revolutionary May Day of 2020. The world is gripped by the dangerous corona and we are all involved in the survival struggle. The economies of almost all countries are under serious crisis. It is assessed that it may take many months for returning to economic stability. The crisis has forced us to continuous lock outs and shut down of all economic activity.
But we look around that the Government of India is busy in extending marginal benefits only so far to the weaker sections of our society. But the tip of the iceberg shows that offers to the affluent corporate houses which had been enjoying larger share of the cake by way of heavy tax concessions in budget after budget will be extended with heavy bailout packages much more than what had been offered to crores of toiling sections. The Government will gag the mouth of workers by forcing them to work for longer working hours instead of implementing the 8 hour per day work as symbolized by the May Day. Several lakhs of migrant workers who have no permanent roof but working for longer hours in almost all States will be exploited to the hilt but there will be no regularization of their labour. Already there are indications that their meager wages will be reduced on par with MNRGEA level! In short almost all the big houses will try to throw the burden on to the shoulders of the workers and people and escape unscathed. Even the CG Workers and Pensioners are not spared; heavy economic burden has been inflicted on them by way of 18 months DA/DR cut!
The future is very hard for us. On one side the attacks on us will be mounted in the name of Corona and economic crisis. The existing trade union rights and labour welfare measures will be confiscated. In addition several democratic rights of people may be trampled under the foot in the name of saving the economy. The work hours will be increased. The salary will be reduced. The job loss will be thrust. But the Corporate Houses will only be marginally affected or totally out of any scratch due to bailout packages extended bt the Government. Already big organizations of Corporates like FICCI and CII have placed demands for bail outs for millions! It will be a real surprise if the Government not yields to the organizations of Corporates!
But let us not undermine our strength of unity. Only through the unity and dogged battles we the working class and Pensioners class can save the day. Let us pledge on this year May Day that we shall not lower our guard but remain vigilant and fight to preserve our interests in the near future.

Posted by Postal Pensioners at 18:41 No comments:

Confederation strongly oppose and protest the unilateral decision of the Central Government. We demand the Government to review the decision immediately and withdraw the DA & DR freezing orders.

Confederation CHQ is in touch with National Council (JCM) Staff Side Secretary and other leaders. Efforts are being made to arrive at a united stand and convey the same to Government through Secretary, JCM Staff Side. Detailed statement of Confederation will be issued shortly.
R.N.PARASHAR                       Secretary General
Posted by Postal Pensioners at 00:21 No comments:

General Secretary Shri Shiva Gopal Mishra said that All Railway employees who are working 24×7 days during this
crisis and facing several adverse conditions and having the corona virus infection risk, and running freight trains,
parcels Trains and other special trains uninterruptedly while maintain railway assists. He told that All Railway
employees and all central Government staff already contributed his one day salary in Prime Minister National relief
Fund.

Shri Shiva Gopal Mishra said that I have already written a letter to Cabinet Secretary and DOPT Secretary for reviewing the decision because deferment of DA will seriously affect for financially to serving and retired Central Government employees , and I have told him that this kind of arbitrary order will demotivate the railway employees as well as central Government employees in general. DOPT Secretary assured that after lockdown period he will arrange the meeting on this issue to review and discuss in the fruitful way.
Shri Shiva Gopal Mishra, General Secretary AIRF and Secretary NC/JCM (Staff side) appeals to the Prime Minister of India to kindly review the matter for ensuring the payment of DA and Dearness relief along with arrears to the all Railway employees and central Government staff and pensioners when pandemic is contained.
Posted by Postal Pensioners at 00:19 No comments: 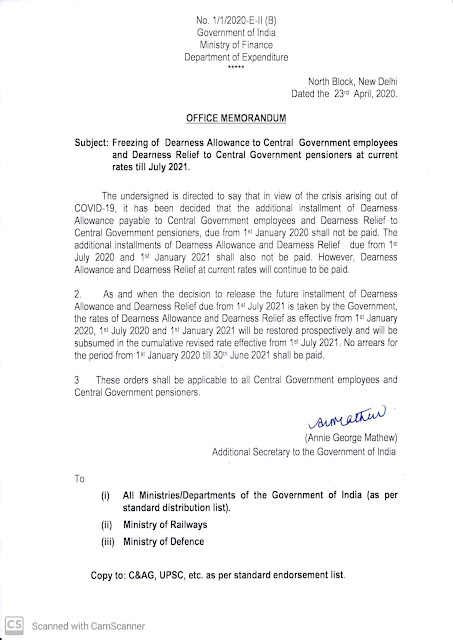 While we cannot totally oppose the delayed release of DR to us due to financial crunch, whether it should extend for 3 installments and as to whether the arrears to be non returnable are being discussed within NCCPA.

All are requested to please wait for the stand of NCCPA and Staff Side JCM soon.
- KR GS AIPRPA -?

While we cannot totally oppose the delayed release of DR to us due to financial crunch, whether it should extend for 3 installments and as to whether the arrears to be non returnable are being discussed within NCCPA.

All are requested to please wait for the stand of NCCPA and Staff Side JCM soon.
- KR GS AIPRPA -
Posted by Postal Pensioners at 01:59 No comments:

CHQ requests all States and Districts/Divisions to inform to CHQ the quantum of donation sent to PMNRF or CMRFs of respective States to fight Corona.

The information may be sent to CHQ in WhatsApp AIPRPA CHQ or AIPRPA groups or to my phone by SMS (9444919295) or in email to aiprpachq@gmail.com.

Those who have not yet reacted are once again requested to act fast!
- KR GS AIPRPA-
Posted by Postal Pensioners at 07:50 No comments:


Department of Posts issued an order dated 9.4.2020 in which it is stated that pensioners who desire to donate one day pension to PMCARES may give letter to DDOs. Therefore it is only optional for pensioners.

AIPRPA CHQ had already issued detailed instruction about our task to fight corona and therefore to donate to PMNRF or Respective State CM Relief Funds.

Please follow CHQ's earlier instructions. CHQ is donating 25,000 to PM National Relief Fund. Many States and Districts have either remitted to PMNRF or State CMs or for both. So, chq requests our organisation leaders to collect and donate to PMNRF or CM Relief Funds as per their decision.

But, if anyone desires to give letter as per department order, he or she may do so. - KR GS AIPRPA
Posted by Postal Pensioners at 02:06 No comments: 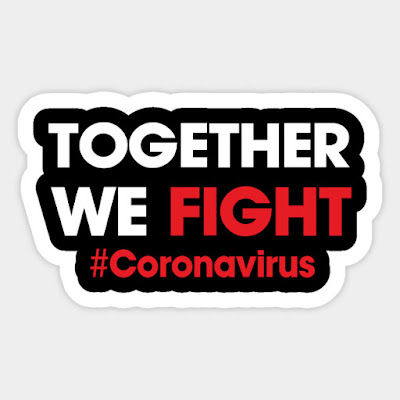 The CHQ is glad that instantaneous activities have started at various level in organising donations and remitting it to respective State CM Relief Fund.

Due to high controversy over PMCARES Fund and to avoid any controversy AIPRPA CHQ donation against corona will be remitted to PM Relief Fund only!

- KR GS AIPRPA-
Posted by Postal Pensioners at 22:25 No comments: