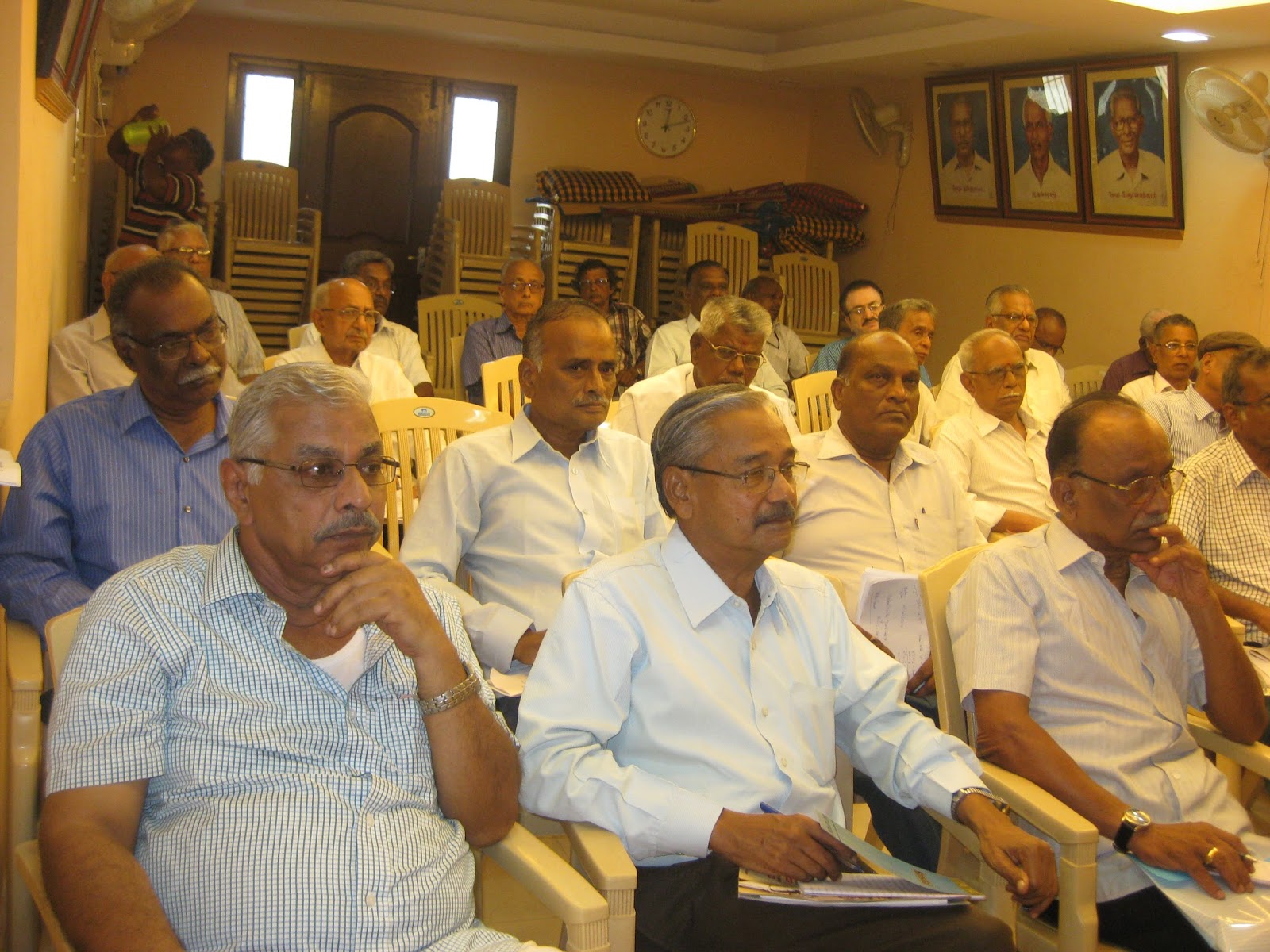 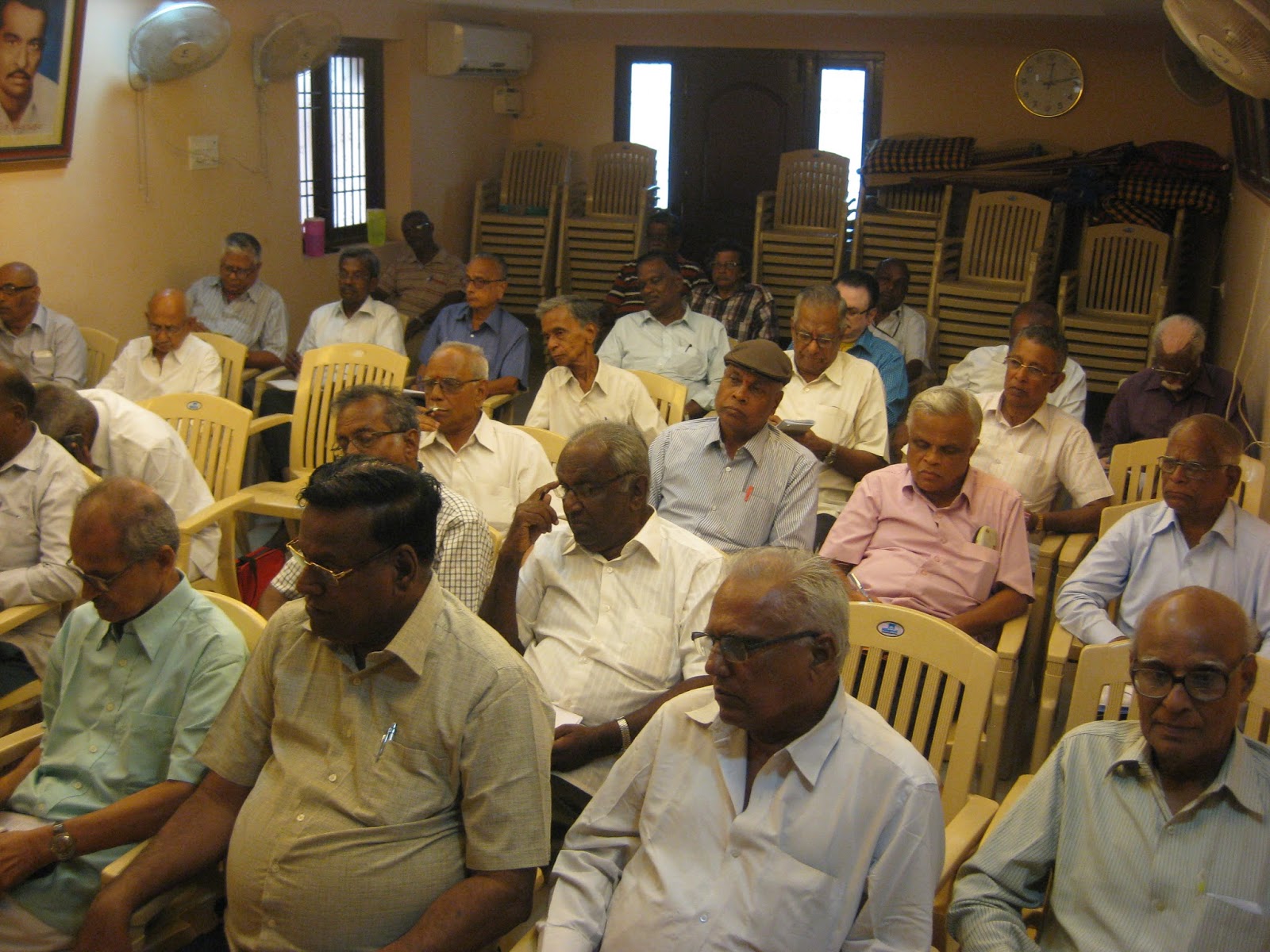 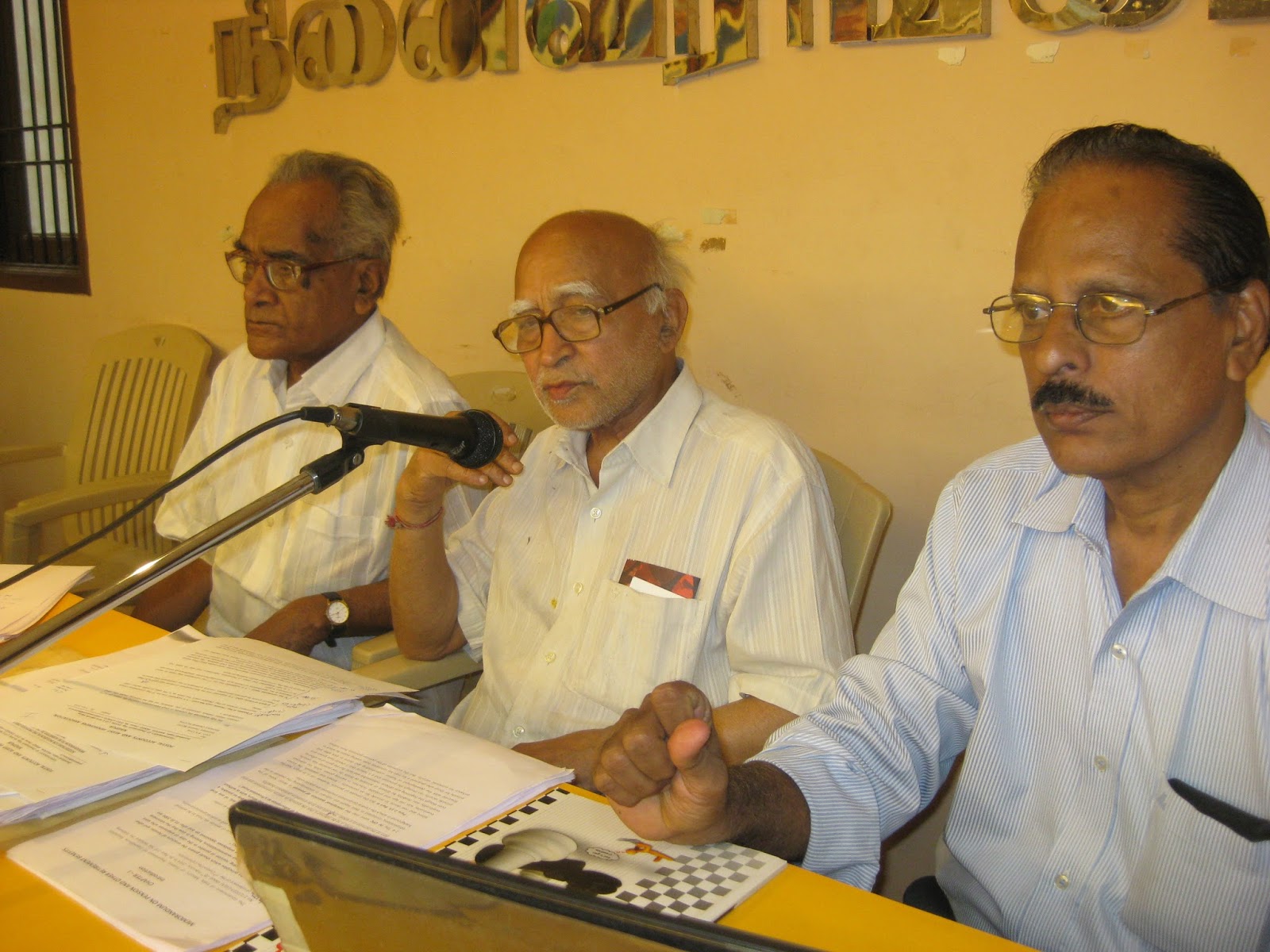 The meeting of All Pensioners Organisations sponsored by BCPC was held at Chennai as scheduled on 14/06/2014 at D.J.Ninaivagam. The Circular issued by the Secretary General of BCPC along with the proceedings  of the above meeting as circulated by BCPC are placed hereunder for the information of all:

As scheduled the meeting of the representatives of various Central Government Pensioners Organisations took place today in Chennai. The meeting was presided over by one of the Vice Chairman of BCPC Comrade R.L.Bhattacharyya. 31 representatives from fifteen Organisations participated in this meeting. This meeting was called to discuss all the amendments and suggestions received on the draft memorandum prepared by BCPC and exhibited in the websites. Two organisations viz., All India Railway Retired Employees Federation, Secunderabad led by Comrade Y.N.Sasthry and All India Federation of Pensioners Associations, Chennai led by Comrade Balasubramanian have sent their written suggestions for amendment of the Draft Memorandum. Some of the representatives on the spot gave their suggestions either in writing or even verbally.

All these suggestions etc were frankly considered and either incorporated or ignored on the basis of consensus reached in the meeting.

It was also agreed that the memorandum should be submitted to the 7th CPC on certain fundamental issues relating to Pensioners so that these could be focussed and claimed serious consideration by the pay commission. It was also decided that some issues which were pressed hard by the representatives should also find place in this memorandum as miscellaneous items. Further it was decided that a separate Memorandum should be prepared by departmental specific Pensioners organisations like Postal Pensioners, BSNL Pensioners, Railway Pensioners etc, which should form Part – II of the Memorandum.

The final draft of the Common Memorandum would be finalised before 22nd June and would be placed in the websites of both the NCCPA and BPS. All Organisations are requested to post their comments and convey them through emails to NCCPA (nccpa.hq@gmail.com) latest by 25th June, 2014. After considering these comments, the final Memorandum will be prepared and submitted to 7th CPC on behalf of BCPC and all the participating organisations by 30th June, 2014.

A summary of the proceedings of this meeting is also attested.

Having succeeded in finalising a common memorandum on pensioners  related issues, the first step in the direction of uniting the pensioners has been taken. More than submission of this Memorandum to the Pay Commission, we should present it before the mass of pensioners all over the country and educate them as to why these fundamental issues have been raised with emphasis rather than raising all and sundry issues before the pay commission. The meeting unanimously accepted this approach and authorised the Secretary General to finalise with the following five points prioritised:

This memorandum represents the aspirations of the entire community of pensioners and therefore it is primarily meant to be addressed to them if the Commission does not impart justice on the issues raised by us in this memorandum. The membership should be prepared and united for appropriate action to back these demands.

It is hoped that all Pensioners Organisations would endeavour to involve the entire membership in  pursuance of these goals, which we have raised before the Pay Commission.

Proceedings of the meeting of All Pensioners Organisations held at Chennai on 14/06/2014 to discuss and finalise the Common Memorandum:
R.L.Bhattacharyya Vice Chairman of BCPC Presided
Condolence by two minutes silence observed.
S.K.Vyas: Last time when 6th CPC was constituted, we had similar meeting of all Pensioners Organisations and submitted a common memorandum for limited purposes. Before 6th CPC was set up some pensioners organisations, particularly AICCPA, RREW Secunderaabad, BPS and NCCPA came together to form a steering committee for the purpose of drafting a common memorandum. Accordingly a draft was prepared by the committee and that was circulated and then a meeting held at Bangalore and Hyderabad and subsequently in Delhi had finalised the memorandum to be submitted to 6th CPC. After the job was over, the sponsors of the steering committee thought why not convert this steering committee into a spex level organisation of pensioners. Then a convention was held at Kolkata in which BCPC was constituted. Next meeting at Delhi BCPC Came into existence with bylaw etc. Shyam Sunder was the founder Secretay General of BCPC and due to his illness he resigned and I am asked to officiate as BCPC SG. I was only a patron but still I was asked to accept. Thereafter the AGM of BCPC held at Delhi, it was decided that BCPC should initiate the process for finalising a common memorandum for 7th CPC. Immediately we issued circular issued by BCPC for all to give their inputs and suggestions on the basis of which a draft common memorandum will be prepared. The CPC has announced that before 31.05.2014 memorandum to be submitted. JCM NC tried to get extended time. Before its fructification, some organisations have finalised their memorandum and submitted in order not to miss the bus. Still a common memorandum was prepared by us and placed in websites. WE asked all to send their suggestions modifications etc so that we can consider all such suggestions. So this meeting is called.
Generally response to such initiative  is sluggish. Still 20 organisations sent their suggestions. We have this memorandum that we will take up the suggestions one by one and decide whether we can incorporate them or not.
Amendments and suggestions received from different organisations were taken up one by one for discussion:
Nagpur:
Proposal made for once in 5 years revision of pension should be done: House agreed it and included in Chapter VIII Misc.
Grant of Interim Relief: 10% of Pay or pension as IR pending finalisation of Report. Staff side has demanded 25% of Pay. So should we accept 10% or fall in line with 20% as demanded by JCM Staff Side. On a discussion point it has been decided that no need to give a supplementary memorandum only on IR and Merger DA as like JCM because it will only be duplication of things. So we will demand 25% IR in Misc Chapter VIII.
VII CPC should submit its report simultaneously to Staff Side and Pensioners Organisation. This is not necessary as Pensioners Organisation is not recognised by Govt. All SCOVA members can ask for a copy when the report comes out. We need not ask as part of the Memorandum.
Nomination: Only one nominee is allowed by banks and Post Office. Why not more nominees allowed? This is not an issue coming under the purview of CPC. This need not be pressed.
Uniform PPOs: Agreed as at present PPOs draft are separate for department to department. We will raise it under Miscellaneous Chapter VIII for uniform PPO draft for all pensioners. This will be asked.
Pension should be net of Income tax: This is already in our memorandum.
Statutory body SCOVA: Three tiers SCOVA may not be a correct demand. But SCOVA as a statutory body and democratisation of representation may be demanded. The Para 8.12 is ok. We can demand change of nomenclature from SCOVA from Joint National Council of Pensioners Organisations. Comrade DG pointed out the need for two tier system one at National level (National Council) and another at Department level (Departmental Council). This is accepted and will be incorporated in the memorandum.
Disbursement of Pension at residences: Not necessary as ATMS are there near by residences as well as EMOs at the cost of Government is also there. The limit also we have asked to raise.
Family pension for 10 years at higher rates: Family is a unit. 3 unit families are reduced on retirement time and later if pensioner dies the family becomes one unit family. This is the reason for reduced pension. The 15 years for harness death is removed on suggestion from DG.
ITEF KKN:
Staff Side demanded that last pay drawn be taken as pension. Similarly we should demand that the pension should not be less than the minimum of the pay scale of the cadre in which he or she is retired. This amendment will be incorporated in para No: 3.9
AIFPA:
Merger of DA / IR: We have already incorporated.
Approved Chapter 1
Approved Chapter 2 but wanted to add Para 1.1 of BPS as Para 2.9 – This suggestion has been approved.
Chapter 3: Some paragraphs in Chapter VIII should be transferred to Chapter III. This suggestion is agreed upon.
Para No.12 of BPS need not be included – This is accepted.
BSNL pensioners as in Karnataka CCGPA memorandum – This was accepted.
Add a caption “Additions in Pension” above Table in Para 3.13 – Accepted.

S.K.Vyas: 8.4 Para: we will add one line that this table will not apply in case of family pensioners while they are drawing the enhanced pension.

Memorandum by AIBDPA:
A copy of memorandum as prepared by AIBDPA was supplied by Comrade C.K.Narasihman and he said that the stand of his organisation is that regarding fitment formula for BSNL pensioners is that Central Government fitment formula will not be beneficial and also not logical.
S.K.Vyas said that the view points of AIBDPA will also be included for other issues and as far as the issue on which there is difference between the AIBDPA and AI BSNL PWA, those issues can be taken up in their respective Sectional Memorandums.

Memorandum of AIRRF:
Some suggestions from meeting:
Para 8.9: reference to serving employees for death relief to be removed.
Kerala CGPA Memorandum: Grant of Festival Allowance to be added in our memorandum.
Memorandum by AIBDPA sent by Com.Jayaraj will be included.
Vyas concluding: We have agreed major points. We could not agree to some points. My approach is always that we should raise limited fundamental issues before the pay commission. But unfortunately with my views is not shared by most of our comrades; if we concentrate on some specific issues then some serious consideration is possible. But unfortunately this view is not shared by many. The major things are there in the memorandum should be:

All other points are not as significant as like these 6 issues. If we crowd the memorandum then there is a tendency to dilute our major points by the pay commission. Will you permit to remove the fab from the memorandum and concentrate sincerely on major issues and educate our members about our approach?
These suggestions were agreed to by the entire house. The meeting ended with the vote of thanks to the Chair and to the host organisation “All India Postal & RMS Pensioners Association”.

Posted by Postal Pensioners at 20:15