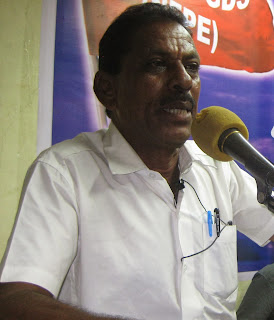 Comrade Gopu Govindarajan who became Circle Secretary of NFPE P4 Tamilnadu Circle quite recently on  24.10.2013  and who stole the hearts of thousands of employees through his dedicated services to postal workers in particular had passed away on 7.2.2014 night. He had a massive stroke on the night of 6.2.2014 and admitted in hospital. After unsuccessful treatment he was shifted to MIOT hospital. He, who fought many successful battles during his trade union career, battled unsuccessfully against the stroke and succumbed. He died without regaining his consciousness in hospital ICU ward. A warrior is thus no more among us.

A humanist, A bold trade union worker, A stead-fast fighter, A fine Organizer, A quick-witted and humorous orator, A good negotiator with Officers, A tireless activist, A friendly person to all including adversaries, A believer of socialistic principles, A great cadre Comrade Gopu Govindarajan is no more. Hundreds of comrades, friends and relatives bid farewell to him yesterday evening and his mortal remains were put to electro flames at about 06.00 P.M.

Red Salutes to you Comrade Gopu!
We shall remember you always!
Posted by Postal Pensioners at 23:33