Observe the Day and honour the memory of this tall leader! 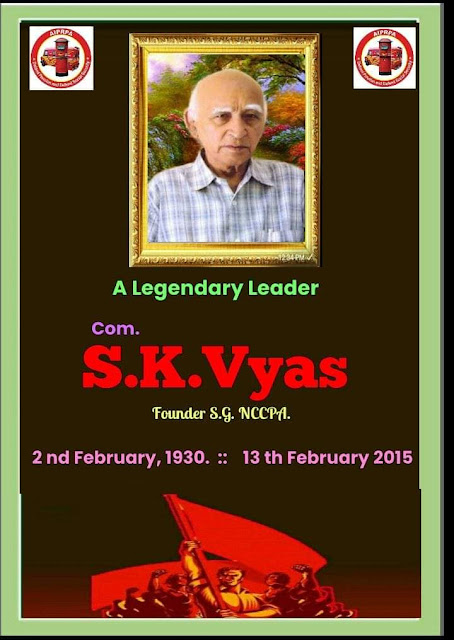 On 13.02.2021, the entirety of CG Employees and Pensioners remember and hold a befitting function on the 6th anniversary of demise of Comrade S.K.Vyas, the 'Pithamah' of Confederation Movement and Pensioners Movement in India! He played a unique and vital role from 2nd to 7th CPC on behalf of Staff Side!

Comrade Vyas was a walking university of all issues of Employees and Pensioners. An encyclopedia with unparalleled memory! Always ready to absorb new and novel ideas for the growth of movement. It is enthralling to remenber him as a democrat in leading the movement and never stepped outside the parameters to suit temporary gains. A human to extend help to any one in need of any help. A fighter with militancy against the erroneous policies of Government unminding undue criticism levelled against him as a practitioner of 'politics'! A versatile personality with very humble and simple way of life!

AIPRPA always remember comrade Vyas as a staunch supporter of our postal and RMS Pensioners movement. He attended all our important conferences by undertaking even arduous journeys and guided us. He unhesitatingly advocated the formation of departmental wise pan Indian associations of pensioners and believed that it is an inevitable step to strengthen NCCPA. It was comrade Vyas who influenced the Chairman 7th CPC to end the decades old discrimination against P&T Pensioners in joining CGHS.

His passing away had caused a wide vaccum that could not be filled up even today!

Let us all remember comrade Vyas and hold befitting memorial functions in his honour and memory on 13.02.2021 - the day of 6th anniversary! - KR GS AIPRPA

Posted by Postal Pensioners at 22:50