Mr.Rathin Roy! You have no moral right! 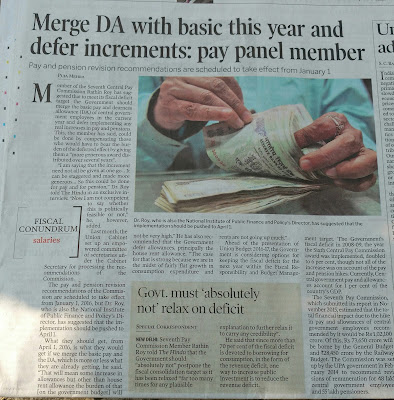 Here is a Pay Commission Member speaking against his own team led by Justice Mathur after submitting recommendations with more than 21 months research! He recommended for date of effect as a team from 1.1.2016; now he says not to implement this year but defer to 2017! He also suggests defer HRA and other Allowances! Mr.Rathin Roy has no moral or ethical right to speak against after submitting the Report on behalf of 7th CPC in which he too was a member!

This gentleman so eager and concerned about fiscal deficit has no comments about Government stealing more than one or two lakhs of crores by not allowing to fall petrol and petroleum products despite internation record fall of crude oil prices!

He should have watched the comments if his Chairman Justice A.K.Mathur who defended the Report against Five Chief Ministers who wanted such deferment. You don't want to follow Chairman Mathur then you should have walked out of Pay Commission earlier!

God save such individuals! -