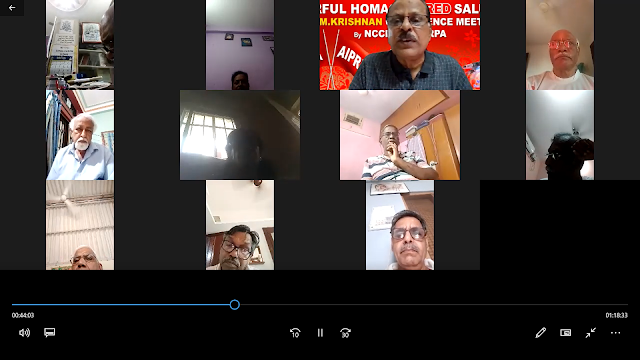 On 11.05.2021 at 3.00 P.M the virtual meeting of CMC of AIPRPA CHQ was held under the presidentship of CHQ Vice President Comrade B.M.Sunda. A written note was already circulated to all the CMC Members by the General Secretary for facilitating a discussion on all items of agenda notified.

After the General Secretary initiating discussion based on the written report and all State General Secretaries and CMC Members deliberated on it, the following decisions have been taken unanimously:

1)      The AIC as well as State Conferences and District / Divisional Conferences of AIPRPA shall be postponed until normalcy and end of Corona pandemic.

2)      All CMC Members shall send emails to CHQ on issues pending at their state level like Induction training inclusion for TBOP/BCR; Upgraded pay from 1.1.1996 to Postman/Mailguard including TBOP/BCR cadres; CHGS related problems etc., for taking appropriate action by the CHQ.

3)      On DA/DR unfreezing from 1.7.2021, the CHQ shall organize a email campaign in the month of June 2021 to the Honourable Prime Minister requesting him to cause to end the freeze. The CHQ also is directed to inform the JCM Staff Side and NCCPA leadership to explore the possibility of organizing a campaign on this issue in the month of June in the form of sending emails etc to the Government. The CHQ will request the NCCPA to explore the possibility of moving the court in the background of stand of the Supreme Court in the case involving the Andhra State Government on the issue of freezing of salary and DA/DP.

4)      A resolution was adopted urging the Central Government to ensure quick vaccination to all population at free of cost to protect from COVID-19. It was also decided to request the Government to include the CGHS Wellness Centres as vaccination centres.

5)      A letter will be written by CHQ on the issue of non-circulation of several OMs in the Chhattisgarh State by the administration resulting in denial of implementation of several orders issued by the Directorate.

Posted by Postal Pensioners at 07:02