WFTU Resolution on Solidarity to CUBA as prepared by WFTU!

DRAFT RESOLUTION OF THE WFTU INTERNATIONAL CONFERENCE OF SOLIDARITY WITH CUBA, 22.07.2021 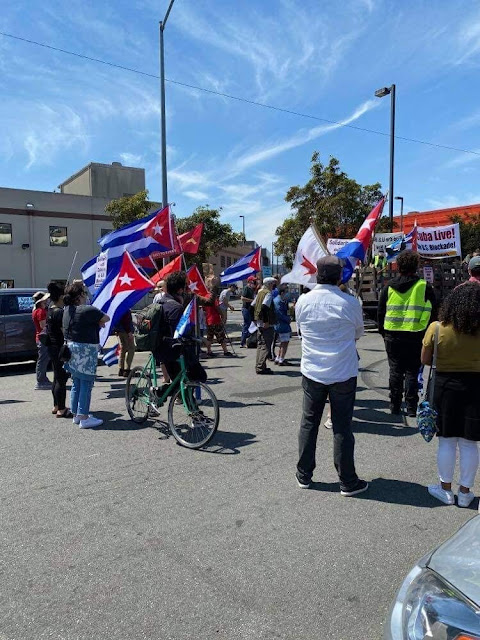 The World Federation of Trade Unions, representing 105 million workers in 133 countries on the 5 continents, the militant trade unions WFTU members and friends, trade unions and workers around the world, reiterate our solidarity with the Cuban People against the new imperialist plan of the USA against Cuba.
We condemn the direct involvement of the United States and some forces inside Cuba that support their plans, in the preparation and funding of a giant internet and other media manipulation campaign. They aimed to undermining the conquests of the revolution by attempting to exploit difficulties and shortages in Cuba, in the midst of the pandemic, for which difficulties the main culprit is the criminal 60-year economic blockade by the USA. Leaderships of yellow trade unions that support and encourage small groups in Miami that appear as alleged trade unions of Cubans, also play a dirty role in this anti-Cuban attack. These are mafias that slander socialism and the glorious history of the Cuban Revolution and of the glorious leaders of the Revolution.
We all salute the tens of thousands of Cuban workers who protested against the imperialist plans and in defense of the Cuban conquests, canceling the destabilization plans.
Despite the difficulties of the blockade, Cuba managed to maintain low mortality during the pandemic due to its universal public and free health system. It sent brigades of doctors and health workers to dozens of countries affected by the pandemic, who offered in practice their internationalist solidarity day and night, at a time when capitalist states such as the United States were competing for the profits of their monopolies, with their people dying by thousands due to lack of protection measures. Cuba has produced five vaccines, with one of them reaching a very high rate of protection against the pandemic.
The world class-oriented trade union movement stands firmly and unwaveringly by the side of the Cuban people and the heroic Central de Trabajadores de Cuba. We demand the lifting of the blockade and of economic sanctions against Cuba. We call upon the International Organizations to take action for their abolishment.
STOP to the imperialist intervention!
Cuba is not alone!
The participants in the Conference.
Posted by Postal Pensioners at 08:14