Postal Pensioners Programme of Action on Common and Sectional Demands of Pensioners!

AIPRPA CWC RESOLVES TO HOLD ITS NATIONWIDE PROGRAMME OF ACTION ON THE CHARTER OF DEMANDS OF PENSIONERS
Both Common & Postal Sectional! 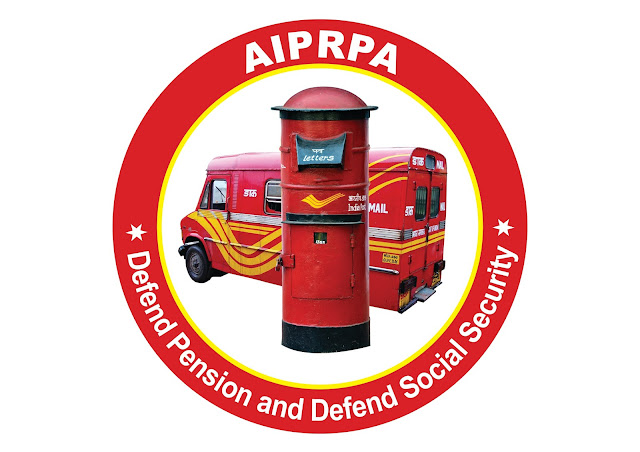 The CWC of AIPRPA held at Chennai has resolved to organise a nationwide Programme of Action by the Postal & RMS Pensioners to highlight the important issues of Pensioners as well as peculiar major issues of Postal Pensioners before the Central Government. The Charter of Demands and the Programme of Action finalized by the Central Working Committee is as follows:
Postal Pensioners Sectional Charter
AIPRPA shall undertake an All India Programme of Action to highlight the basic common issues of Pensioners and important sectional issues of Postal Pensioners viz.,
(a)    Grant of Universal pension of minimum 3000/- to all Senior Citizens of India irrespective of the fact that they had worked in private sector or unorganized sectors as being demanded by the Central TUs.
(b)   Scrap NPS to all CG Employees recruited from 1.1.2004 and bring them all under Defined Pension Scheme.
(c)    Grant of Full Parity in Pension between the past, present and future pensioners akin to OROP granted to Pensioners of Armed Forces.
(d)   Accept the recommendation of Option Number 1 given by the 7th CPC for pension Refixation by notionally adding the number of increments earned by the pensioner in the pre-revised scale of pay from which he/she had retired as the same is feasible by records either directly or by reconstruction.
(e)   Correct the recommendation by changing the “nearest level” to “next level” in fixing the stages after each annual increment in the Pay Matrix for the employees (like 6th CPC formula) and Link the pension re-fixation under Option Number 2 with the Matrix to the next level on par with the employees.
(f)     Grant of Refixation of Pension on the basis of the scale of pay of the cadre / post from which the Pre-2016 Pensioners had retired instead of only on the basis of the replacement scales to end the injustice being done to the retirees belonging to the cadres of Postman, IPOs, ASPOs etc in the Department of Posts.
(g)    Ending the injustice perpetrated to HSG-1 Pre-2006 Pensioners by granting the benefit of 4600 GP as granted to serving employees from 1.1.2006 by accepting that the scale is only a replacement scale in the backdrop of feeder cadre is allotted the 4200 GP scale by 6th CPC.
(h)    Issue of orders as agreed by the Department and also as ordered by the Supreme Court for the grant of pension re-fixation for all Post-1.1.1996 Pensioners of Postman cadre with two advance increments.
(i)      Grant of minimum pension by delinking the condition of 33 years of qualifying service to compulsorily retired employees also w.e.f 1.1.2006 as envisaged by the original orders of the Department of Pension & Pensioners Welfare.
(j)     Enhance the Fixed Medical Allowance to 2000/- per month.
(k)    Accept and implement the positive recommendations of 7th CPC without delay on extension of medical benefits to all Pensioners including the Postal Pensioners by (1) removing the unjust condition of Health Ministry to allow all Postal Pensioners into the CGHS without any discrimination; (2) granting reimbursement facilities of in-patient treatment to all Pensioners in non-CGHS areas on par with the serving employees of that area; (3) Merger of existing P&T dispensaries with CGHS without conditions; (4) Finalization of Medical-insurance schemes covering all non-CGHS pensioners to get cashless and hassle free medical treatment; and (5) Merger of different systems like CGHS, Railway and Defence Hospitals to create a centralized health system for better Medicare to all employees and pensioners.
(l)      Revise the Pension by applying the orders for treating the training period as eligible service to get TBOP/BCR upgradations.
(m) Allot rent-free BSNL / MTNL land-line phone to all erstwhile P&T Pensioners without any condition on length of service as ordered by courts.
(n)   Allot vacant Postal Staff Quarters not preferred by serving employees to willing Postal Pensioners on seniority basis instead of keeping the quarters vacant for long time.

(i)                 AIPRPA CHQ will write to the Chairman of the High Level Committee; Health Minister; and Finance Minister focusing the Charter of Demands immediately.
(ii)               Demonstrations shall be held at all places by the AIPRPA on 19th September, 2016 and Memorandum will be forwarded to Health and Finance Ministers. (Draft Memorandum will be circulated to all through CHQ website)
(iii)             Mass Dharna by Postal & RMS Pensioners on 21st October, 2016 to demand implementation of the Charter of Demands.
(iv)              ‘Chalo Delhi’ by Postal & RMS Pensioners to conduct a ‘Mass Demonstration’ in front of Parliament on 21st February (Date will be subject to finalisation in consultation with NCCPA to synchronize with the National Convention against NPS proposed by NCCPA) and to submit the Memorandum to the Prime Minster of India.

We call  upon our rank & file Districts and Divisions to take the call seriously and start hectic preparations for all the Programmes including “Chalo Delhi” Parliament Dharna! Without our active protest like the Pensioners of Armed Forces who got their OROP through struggles, no advancement can be expected from the Government.