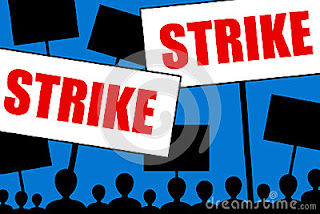 On 2.9.2016, the entirety of Workers & Employees under the joint banner of Central TUs & Federations and Unions of Central, State Govt and PSUs go on strike.

Pensioners shall extend solidarity and a call through NCCPA will shortly come, that will be endorsed by AIPRPA also.

Meanwhile, AIPRPA Tamilnadu State, as part of TN State COC of Central, State Govt and Public Sector Pensioners Organisations has issued a call for joint demonstrations in solidarity. This solidarity demonstration shall be held in Chennai (State Capital) and all district capitals on the forenoon of 2.9.2016.

AIPRPA Tamilnadu Districts / Divisions are called upon to establish contacts with State Govt Pensioners Koottamaippu and AIBDPA etc associations to plan a massive pensioners demonstration on 2.9.2016 in all districts of Tamilnadu!

As far as other states are concerned, all are advised to get ready and await the call of NCCPA / AIPRPA CHQ shortly!