Action Ahead! Get Ready to Act on NCCPA Calls! 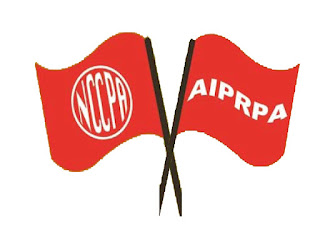 Dear Comrades! Kindly go through and download the Circulars of NCCPA and NJCA Letters etc.

Please organise total solidarity action to the one-day strike by Confederation of CG Employees on 16.03.2017.

We give hereunder a brief note over the developments that have taken place in last 2-3 months.

Despite our best efforts, we have not been able to carry conviction  with the Pension Department to act up on the 7th CPC recommendation pertaining to  Option No.1. This has crashed the hope and aspiration nurtured by a large no of pensioners especially after the 7th CPC report was out. The JCM Staff Side had,  as you are aware,  held meetings with Department of Pension when an  alternate suggestion was mooted by the official side. As  the alternative suggestion will indeed  benefit a section of Pensioners, we requested that the same may be taken as the 3rd option. It is now clear   that the Pension department has submitted its report rejecting option No.1 as infeasible to the cabinet and the Cabinet assent is awaited.. In this situation we feel that all affiliated associations and federations must advise their units to hold Demonstration on 15th February 2017 and send the following communication to the (1) Honourable Prime Minister, (2) Honourable Minister of State for Personnel, (3) Honourable Finance Minister, (4) Cabinet Secretary,  (5) Secretary Pension, Department of Pension and Pensioner Welfare, and (6) The Secretary, Department of Personnel and Training.  We have appended to this letter the format of the communications to be sent to the Prime Minister and others.

As you aware the Confederation had earlier decided to Organize a one day strike on 15.02.2017 in view of thee total inaction on the part of the Govt. to honour the agreement reached with the Staff side JCM on 30th June 2016 and  confirmed in writing on 06.07.2016. The said one day strike has been now postponed to 16.03.2017 on account of the declaration of Election schedules by the Election Commission for the States of UP, UK, Goa, Manipur and Punjab. The Present NDA Government has exhibited the worst anti-employee attitude.  Not a single issue projected by the JCM Staff side on behalf of the pensioners and employees was considered favorably.  In the name of consideration of the demands, the allowances  have been withheld to be implemented.  All the Committees set up by the Government in the wake of the 7th CPC recommendations had only been indulging in dilatory tactics and no worthwhile negotiations  was held  with the employees organisations. It was in this background that  the the National JCA met on 17.1.2017 at Delhi. Though the revival of the deferred strike action was discussed no final decision could be taken. The leader and Secretary have now been requested to interact with the Hon’ble Ministers and reconvene the NJCA once again. The letters written in this regard by Secretary Staff side are enclosed.

The Govt. has setup a committee as per the recommendation of the 7th CPC to streamline the NPS  in view of the plethora of complaints lodged against it  by the stoke holders before the Commission.. The first meeting of the said committee was held on 20th January 2016. The written submissions made by the Staff side Secretary are enclosed. It is likely that the committee will hear the Staff side once again.  In order to enable the Staff side to submit an elaborate memorandum it has been decided that a meeting of all the National Council members must be held soon.  We have also been requested to present our proposal for consideration and incorporation.  To enable us to submit a cogent and well prepared document, we request you to kindly send us your suggestions in the matter before 5th Feb. 2017.

With greetings,
Yours fraternally,

Format of the letter to be addressed to the Honourable Prime Minister and Others.

On behalf of the Pensioners, who are our members, we are to bring to your kind notice that the Central Government pensioners throughout the country are extremely distressed on coming to know that the Pension and Pensioners Welfare Department of the Government of India has finalized and made their submissions to the Cabinet suggesting inter alia that the recommendation made by the 7th CPC in respect of pension determination under Option No. 1. be rejected on the specious ground that the said recommendation is infeasible to be acted upon.

In this connection we send herewith a copy of the submissions made by the Staff Side of the JCM on our behalf which may please be considered before a final decision in the matter is taken by the Cabinet.  For the detailed reasons advanced in the said Note, the decision of the Department of Pension to reject the said recommendations, even though the same has been accepted by the Government and notified, is not only unfortunate but also not tenable.  The said suggestion of the Department of Pension, if acted upon, will crush the hope and aspiration generated in the minds of lakhs of pensioners for a reasonable pension, which the 7th CPC considered and granted.

We, therefore, appeal to your good self that the proposal of the Pension Department, which is presently pending consideration of the Cabinet, may not be accepted and instead the recommendation of the 7th CPC granting option No.1 be acted upon.

We solicit your kind reference to the discussion the Staff Side delegation had with you and your esteemed colleagues in the Cabinet – Hon’ble Finance Minister, Railway Ministers – on 3oth June 206 and subsequently with your good self on 6th July 2016. In the light of the assurance held out for reconsideration of the minimum wage and multiplication factor through the setting up of a high level committee within a time frame of four months, the National JCA had deferred the strike action which was to commence from 11.07.2016.

The National JCA met yesterday (17-01-2017) and almost all members expressed extreme disappointment over the turn of events. However, they felt that a meeting with your good self must be sought to sort out the issue amicably.

We shall therefore be grateful if you can indicate a date and time convenient to you, so that the undersigned along with Dr. M Raghaviah, the Leader of Staff Side, JCM could call on you with a view to explore reaching an agreement. Incidentally, we feel that it must be our responsibility to convey to you that the Central Govt Employees throughout the country are extremely critical of the fact that the Government had not found it possible to accept even a single issue taken up by the Staff Side, JCM after the 7th CPC submitted its recommendations to the Government. This apart, the CG Pensioners numbering presently more than the working employees are aggrieved of the fact that the one and only recommendation of the 7th CPC which was in their favour  i.e. option No.1 have been recommended to be rejected by the Pension Department to the Government.

Expecting a communication for an early meeting and thanking you

Copy of letter addrtessed to the Secretary Pension, Lok Nayak Bhawan, Khan Market, by the Secretary Staff Side on 20th January, 2017.

Sub:-   Meeting of the Committee constituted to suggest measures for           streamliningthe implementation of the NPS for Central Govt Employees –         Reg.

Kindly refer to your aforementioned letter.  At the outset we request you to kindly favour us with a copy of the Government Notification setting up the Committee to make suggestions to streamline the National Pension system for Central Government employees.  This is needed for us to understand the scope and ambit of the functioning of the Committee.

The 7th CPC in their report in paras 10.3.11 to 10.3.25 has enumerated the plethora of complaints received by it over the NPS and has finally recommended to the Government to set up a Committee to look into those issues and address.   However, we are constrained to believe from the reading of para  3 of the letter cited that the Committee is likely to have only a perfunctory consultation with the stake holders on an important issue like this.

In any case, we give hereunder our views in the matter with the fervent hope that the Committee will consider it within the time constraints.

We are of the firm view that the Central Government employees as a whole must be fully excluded from the ambit of the defined contributory pension scheme for otherwise it would create two classes amongst them, one making subscription; and another making no subscription but receiving a better pension and other retirement benefits.

There is no justification for the Government to deduct pension contribution from the Central Government employees, even as per the recommendation of the 7th CPC they are provided with far lesser Minimum wage that what it should have been as per the norms of Dr. Aykroyd formula, approved by the 15th ILC and subsequent judgment of the Supreme Court.

This apart, we were assured by the Government during the Standing Committee meeting discussions held on 14.12.2007 that

“for employees who had entered with effect from 1.1.2004 are not likely to be worse off vis a vis the current pension system in force as the replacement rate would match to the present one.  Thus NPS is a win-win situation for employees and the Government”.

Without deviating even an iota from our firm position enumerated in No. 1 above,  the least the Government must do to honour the assurance given  earlier is to guarantee that all Central Govt. employees who are recruited with effect from 1.1.2004 and have thus become mandatory subscribers to the NPS receive all benefits of pension, family pension and other retirement benefits as is provided for under the CCS(Pension) Rules applicable to the Central Government employees who are recruited prior to 1.1.2004.

To illustrate the point that the Central Government employees, who are recruited with effect from 1.1.2004 are provided with a paltry in the form of pension in total disregard to the assurance held out by the Government on 14.12.2007 we enclose herewith the details of pension entitlement computed in the case of a person, who was recruited after 1.1.2004 and retired after 12 years of service in one of the Ordnance factories under the Ministry of Defence. This person is being paid a paltry amount of Rs 960/= p.m. as pension from NPS, whereas after the implementation of the 7 CPC recommendations the minimum pension is Rs 9000/- + DA p.m. with effect from 01-01-2016.

In fine, we feel that it would be better if the Committee could convene a meeting as is convenient to all its members so that a full-fledged discussion could be held on this vital issue which is of utmost importance to a large segment of employees recruited after 01-01-2004 whose number is increasing day by day.

Posted by Postal Pensioners at 09:07