Inspiring 2nd All India Conference of AIPRPA at Vijayawada! 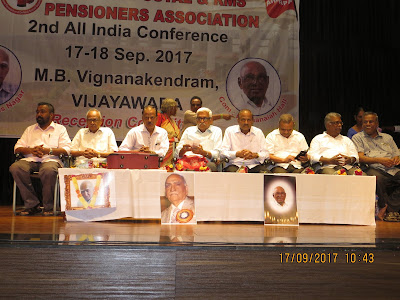 The 2nd All India Conference of AIPRPA was held at the impressive M.B.Vingnana Kendram named as Comrade S.K.Vyas Nagar in honour of the departed veteran leader of the CG Employees and Pensioners at Vijayawada (Andhra Pradesh) from 17th to 18th September, 2017. The AIC was held in the massive auditorium of the premises named after the departed former Secretary General of NFPTE Comrade D.Gnaniah. The inaugural session and the subjects committee of the Conference was presided over by the CHQ President Comrade D.K.Rahate. Prior to the commencement of the inaugural session the National Flag was hoisted by Comrade M.Krishnan Secretary General of Confederation; the AIPRPA flag was hoisted by Comrade S.S.Roy the Working Chairman of NCCPA and floral respects were made to the martyrs’ column amidst renting slogans.

The Reception Committee headed by the Mangalagiri M.L.A as its Chairman and Comrade Y.Naghabhushanam as its General Secretary had taken the responsibility to arrange the AIC. The AIC was attended by 561 Delegates including the Office Bearers and Executive Members besides large number of Visitors. Delegates representing Delhi, Haryana, Punjab, Uttarpradesh, Assam, Manipur, Meghalaya, Odisha, Jharkhand, Madhyapradesh, Chhattisgarh, Rajasthan, Maharashtra, Telengana, Andhra, Karnataka, Kerala and Tamilnadu participated in the Conference. The participation of Delegates from the North Eastern States and Assam despite cancellation of several trains caused by flood situation was inspiring.

The inaugural address in the jam packed hall was made by the National Vice President of CITU Comrade A.K.Padmanabhan who elaborately spoke on the militant tradition of the Postal and CG Employees movement in India since the days of pre-independence and the role played along with the Central Trade Unions against the nefarious policies of liberalization and on the importance of Pensioners movement along with the working class. His speech touched on aspects of the attacks on labour laws and Pension and Social Security by the Central Government and exposed the hollowness of the false claims of the Rulers about the publicized growth of the economy. His speech also dealt at the role of the Indian Government in not ratifying the important conventions of ILO on grant of basic rights to organization and collective bargaining by the Civil Servants in India. He praised the militant participation of CG Employees movement in strikes despite the declaration of strikes illegal by the Government. He pointed out that on 19th September it will be the fiftieth year of 1968 glorious strike of CG Employees and soon we will be celebrating the centenary of the birth of the first formal trade union in India in the year of 1918. He called upon the Pensioners who are imbibed with the rich experience and knowledge of the trade union movement to play an active role in the general working class movement and fight for issues of common people in addition to our own economic issues.
The inaugural session of the AIC was also graced and addressed by the eminent leaders of the CG Employees and Postal Employees movement as well by the leaders of the International and Indian Pensioners movement including Comrades KKN.Kutty (Secretary General NCCPA); M.Krishnan (Secretary General Confederation); R.N.Parashar (Secretary General NFPE); D.Gopalakrishnan (TUI P&R Asia Pacific Region’s Organising Secretary); K.G.Jayaraj (General Secretary AIBDPA); S.S.Roy (Working President of NCCPA); C.C.Pillai (Ex-SG NFPE and CHQ Advisor); K.V.Sridharan (Ex-GS P3 and CHQ Advisor) and senior veteran leader A.G.Pasupathy (Patron AIPRPA Tamilnadu). The speeches were made by the leaders on different topics that enlightened the participating delegates and observers.

Comrade KKN.Kutty deliberated on the topic “NCCPA’s Role in unifying CG Pensioners & Settlement of Pensioners’ issues after 7th CPC”. Comrade M.Krishnan presented his views on the topic “Role of Confederation in solving Employees & Pensioners issues after 7th CPC”. Comrade D.Gopalakrishnan presented paper on the topic “Building TUI & PR in the Asia Pacific Region”. The topic of “Building NCCPA – AIBDPA & AIPRPA as the fulcrum” was dealt by Comrade K.G.Jayaraj. The “Role of NFPE & Service Associations in building NCCPA” was presented by Comrade R.N.Parashar. Comrade S.S.Roy deliberated on “Unification of All Pensioners Associations – Need of the Hour”. Comrade C.C.Pillai covered the topic “NPS – A dangerous device to divide the workers & the Community of Pensioners”. Comrade K.V.Sridharan spoke on “Rights of Pensioners and the power of knowledge on Rulings”.

The Report that was placed by the General Secretary of AIPRPA Comrade K.Ragavendran was followed by a discussion amongst the Delegates. The discussion was absorbing and helped the organization to resolve its position on different issues of Pensioners. The major issues confronting the CG Pensioners in general and the Postal Pensioners in particular received prominence in the debate besides the efforts to build the AIPRPA as a stronger organization. The stand of Officialdom on Option Number 1 and the rejection by the Government on the grounds of infeasibility; The denial of grant of fixation based on the pay scale implemented to the post or cadre from which the pensioner was retired under 12th May Orders of the Government; the rejection of fixation to Pre-2006 Pensioners in accordance with the judgments of different courts to all similarly placed pensioners; the delay in accepting and implementing several health related recommendations to Pensioners etc received prominence both in the Report submitted by the General Secretary and in the debate that followed.

The progress made notwithstanding the above negative stand of the Government was looked into as a product of success attributable to the birth and the subsequent sincere efforts of AIPRPA. The role of AIPRPA along with different Pensioners Organizations to submit a common  memorandum to 7th CPC;  the consistent role to attempt the get Option Number 1 implemented; its role that created pressure on the Government to grant Option Number 3 in lieu of Option Number 1;  the positive recommendation of the Pay Commission to end the age-old discrimination against the Postal Pensioners on the matter of admittance in CGHS after retirement and the subsequent campaign to get the above recommendation quickly implemented etc had been  looked as the initial successes of the organization of AIPROA.

The AIC endorsed the line of continuing the struggle as resolved by the NCCPA’s National Executive held at Nagpur on 19th August and called upon the rank and file to mobilize and participate in full strength in the 1.10.2017 Programme of ‘International Day of Fight for Pensioners’ called by the TUI P&R; and in the ‘Massive Dharna’ of Pensioners on 25.10.2017 at New Delhi. The AIC also endorsed the call of moblisation of pensioners in the massive dharna of Central TUs on 10th November during the three days dharna of 9-11 at New Delhi in which the pensioners of Delhi and surrounding Circles shall be mobilized in larger numbers.

The All India Conference also resolved to organize a Postal Pensioners Mobilization Programme in front of GM Finance offices or Director Postal Accounts Offices or Chief PMG offices on a Charter of Demands in the event of any undue delay caused in completing the implementation of 12.05.2017 orders of refixation of pension. The AIC recognized that struggles’ on the issues of Postal Pensioners is the only means to expand the membership base of AIPRPA as the scattered Postal Pensioners are wooed towards the organization only in the event of struggles focusing their interest.

The All India Conference also resolved to take initiative to found NCCPA COCs in States and Districts by joining hands with other affiliates of NCCPA like AIBDPA.

The enrollment of more subscriptions to the monthly journal of AIPRPA the ‘Pensioners Post’ and also of the monthly of NCCPA the ‘News Letter’ was stressed by the AIC.

The All India Conference adopted Resolutions unanimously on many issues including the following issues of Pensioners:


(12) On different State Specific issues.
Posted by Postal Pensioners at 21:29