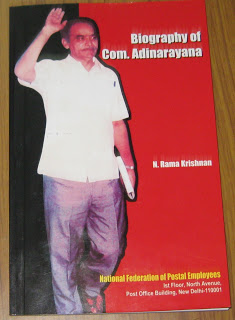 Today (17th June)  is the remembrance day of the revolutionary leader of CG and P&T and the ex-Secretary General of NFPE comrade K.Adinarayana. No other CG Union had conducted as many number of indefinite strikes and strikes as like comrade Adi! Nobody had risen from the position of a casual labourer to GDS to regular to become the GS of P4 and SG of NFPE. His simllicity; living in poverty but upholding the dignity of CHQ even while the period of non-recognition; his courageous leadership in 1984 strike when faced with threats of unrecognition; his leadership with clarity while the movement confronted troubled waters; his drawal of respect and admiration from the top bureaucracy; his skill of inspiring oration in many languages; his total control of house by his interventions- were all his unique characters of aplomb!  Let us all remember him on this historic day!

Posted by Postal Pensioners at 23:10