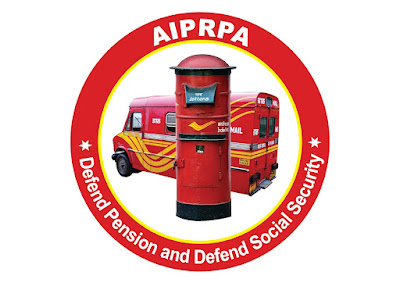 The Central Managing Committee of AIPRPA has met virtually today at about 15.30 Hrs under the presidentship of Comrade D.K.Rahate. The Meeting started with paying the homage to all departed comrades since the earlier meeting. After the approval of the agenda and initiated by the General Secretary, all members of the CMC took part in the intense deliberations.

In addition to the General Secretary who initiated on the basis of the written report submitted by him, the CHQ President also narrated his experiences as the President of the Dispute Resolving Committee constituted by the earlier CMC held on 11.04.2022 regarding the Delhi AIPRPA Organizational dispute. While addressing all the members including the members of the Dispute Resolving Committee had spoken on all issues of the agenda.

The following decisions were taken unanimously:

1.              All State General Secretaries shall send by email the latest and updated mailing list of their District / Divisional Secretaries, their mailing addresses, their WhatsApp mobile numbers, their Email IDs to CHQ within a period of one week.

2.              The next and third All India Conference will be held in Thiruvananthapuram City of Kerala State in the month of December 2022 either in the first week or in the second week as confirmed by the Kerala State General Secretary. The number of Delegates and Visitors shall be limited so that the Reception Committee can make the arrangements nicely. The number of Delegates calculated on the basis of entitlement from each District / Division based on quota paid to CHQ during the last 3 financial years and the number of total Visitors will be intimated to the Kerala State General Secretary well in advance by the CHQ.

4.                   Delhi Dispute will be tried to be resolved democratically by talking to the disputed parties by the Dispute Resolving Committee and by reaching amicable solutions for holding a General Body / Conference afresh. A final decision in this matter will be taken by the next CMC to be held at Coimbatore City.

5.              The solidarity action by the AIPRPA to the NFPE and its affiliated Unions on the issue of Strike on 4.8.2022 and various activities by them has already been declared. Notwithstanding, there will be separate programme of half day dharna on 03.08.2022 (Wednesday) by the Pensioners organized by the AIPRPA at all District / Divisional level in the country. AIPRPA will try to hold the programme by organizing other sister pensioners associations also and if not feasible in some places, the AIPRPA will go ahead on its own to organize the dharna.

6.                   AIPRPA will strengthen the programme of NCCPA and Confederation at all District / Divisional level in the country on the issues connected with CGHS and Parliamentary Standing Committee as decided by the NCCPA National Executive.

7.                   AIPRPA will accept the decision of NCCPA and wait for the final outcome from the Government of India on the issue of releasing the impounded DA/DR as suggested by the President of NCCPA who is also the Secretary of JCM Standing Committee.

8.                   AIPRPA will encourage as per the legal opinion that the plaintiffs who have lost their prayer in the Madras High Court shall implead in the cases before the Supreme Court.

9.                   On organization, the CMC felt the need to expand to States where the AIPRPA is not yet formed and conduct the programme of action called by the NCCPA and AIPRPA CHQ with the available strength.

12.              On issues like non-endorsement of DOPT and DOPPW orders by DOP; On non-grant of FMA to provisional pension drawing pensioners; on non-grant of Pensioners ID Cards at free of cost by some Divisions; On non-holding of Adalat in some places and not adhering to the Rules of Adalat by some Authorities; on changing the attachment of Gwalior to Kanpur Additional Director Office etc, the CHQ should write to the authorities for effective remedies. The issue of expediting the implementation of OM issued by the DoP&PW for compulsorily retired Pensioners and Compassionate Allowance drawees will also be written to the DoP by the CHQ immediately.


Posted by Postal Pensioners at 19:39