NCCPA CALLS UPON PENSIONERS ORGANISATIONS TO JOIN THE PROTEST BY NJCA!

AIPRPA ENDORSES THE CALL OF NCCPA AND CALL UPON ALL OUR LEADERS TO MOBILIZE ALL OUR PENSIONERS AND STRENGTHEN THE UNITED MOVEMENT OF CG EMPLOYEES FOR JUSTICE! 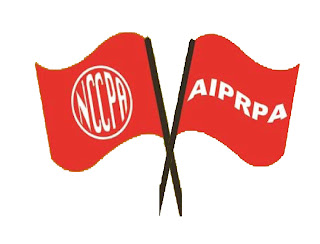 We hope you must have gone through the gist of the 7th CPC recommendations, which we have placed on our website on 20th.  We reproduce hereunder a copy of the Press Statement issued by the Convenor, National JCA, Com. Shiv Gopal Misra immediately after the submission of the report by the commission to the government.  We are in full agreement with the views expressed therein and endorse the same.  In fact from every facet, this report must be characterized as the worst attempt of wage revision for Central Government employees.    The increase in the wages after 10 years is just 14.28%, whereas it was much more in the case of Bank and Insurance Employees whose wage revision takes place every five years.  We have every reason to believe that the present Government has exerted pressure on the Commission to suppress the wage package of the Central Government employees.  It had been our repeated plea that the Commission should not be loaded with bureaucrats drawn from the Government for it is our experience right from the 5th CPC onwards that their presence has influenced the Commission’s recommendations.   No different is the story of the 7th CPC.  The bureaucrats in the Group ‘A’ cadres have immensely benefited from this Commission’s report.  The ratio between the minimum and maximum, as per the 7th CPC recommendation is 1:14, even beyond what the 6th CPC recommended.    It could be seen that none of the demands which the Central Government employees jointly placed before the Commission has been accepted.  There is no reasoning advanced by them to substantiate the rejection.   Most of the issues have been dealt with in a manner of an arbitrator. In order to suppress the wages, the doctrine and formula of minimum wage has been distorted by the Commission.  They have taken the average of 12 months ( July, 2014 to June, 2015) prices of the commodities, which the formula does not stipulate at all.  The minimum wage has to be on the basis of the retail prices of the commodities on a particular date.  The rates are sourced from the Labour Institute, Simla, whose credentials of adoption of the actual rates had been dubious all along.  The Ministry of Agriculture in their website publishes the monthly rates of commodities.  We have worked out the minimum wage taking the average rate of 8 cities as on 1.11.2015.  Even according to those rates, which the Government cannot dispute, the minimum wage comes to Rs. 26000 +. Fitment formula and every other allowances depend upon the minimum wage.    The pay scales are constructed on the premise of the minimum wage. The issue has to be fought out.   We hope the meeting of the leaders of the organizations participating in the JCM scheduled to be held on 8th December, 2015 will take the decision to go ahead with the strike preparation.  That alone will make the negotiation, if at all it takes place, meaningful and fruitful.

Coming to the issues concerning the Pensioners, you must have seen that except in the case of parity, there is no positive recommendation emanated from this Commission.  Every pensioner had expected a rise in the FMA as it is presently pegged down to a meagre amount of Rs. 500.  The Government had agreed to revise the additional pension for those beyond the age of 75.  The 7th CPC has even rejected it on the advice of the Defense Ministry.  We are at a loss to understand that what authority the Defense Ministry has got in this matter.

We shall have to prepare a charter of demands to be presented to the Government through the Staff Side JCM as also directly. We, therefore, request all our comrades, to go through the recommendations and make suggestions for improvement so as to help the Sectt. to formulate the demands.   Kindly bear in mind that the demands which we propose to include in the charter must be such which has universal coverage.

We must join the Protest Day on 27th November, 2015, being organized by the working employees.  Every State Committee and affiliate may decide upon a particular venue in each State Capital and join the demonstration by wearing the black badges.

Please print the following on the badges:

Protest Day 27.11.2015
We protest against the most retrograde  recommendations
Of the 7th  CPC.
Demand the Government to negotiate and revise the minimum wage and settle the issues.

With greetings,
Yours fraternally,

PRESS STATEMENT FOR FAVOUR OF PUBLICATION

Central Government Employees are totally disappointed
with the adverse recommendations of the Seventh Central Pay Commission.

Seventh Central Pay Commission while giving a bonanza
to the higher level officers has completely ignored the low paid employees.

Central Government Employees  to observe "BLACK DAY"
by holding massive demonstration wearing black badges
all over the country on 27 th November 2015.
to protest against the retrograde recommendations of the 7th CPC.

The public at large is misled by the statement that a hike of Rs 23.5% is granted to Central Government employees where as the actual increase is only 14.29%. While the minimum wage is fixed as Rs. 18000/- the Secretary level officers are given a huge hike of Rs. 2,25,000 and the Cabinet Secretary’s salary is fixed as Rs. 2,50,000. Whereas the demand of the National Council — JCM (Staff Side) that the ratio between minimum pay and the maximum pay should be not more than 1: 8, the 7th CPC has kept the ratio as I:13.8; While the National Council — JCM has demanded for reducing and rationalizing the number of pay scales, the 7th CPC rejected the same and retained all the 18 pay scales.

More over the 7th CPC has recommended for abolition of various allowances like small family allowance and advances like festival advance etc. Instead of removing the existing anomalies in the MACP Scheme, the 7th CPC has introduced examination for granting MACP. The 7th CPC has refused to make any recommendations against the New Pension Scheme. For the 2nd spell of 365 days child care leave for women employees the leave wages will be reduced to 80%.

In a nutshell the Central Government Employees are totally upset, dissatisfied and disappointed over the major recommendations of the 7th CPC. Therefore the NJCA has decided to observe a massive demonstration on 27th November 2015 against the adverse recommendation of the 7th CPC. All the constituent organizations are requested to advise their affiliates to observe in an effective manner and also to issue similar press statements in their respective states / centres. The NJCA will meet on 8th December 2015 to finalise the views on the various recommendation of the 7th CPC and to forward the same to the Government for a negotiated settlement.

The NJCA further appeals to the Central Government employees to be prepared to carry forward the struggle till a negotiated settlement is reached.
Yours Sincerely
(Shiva Gopal Mishra)
Convener

Posted by Postal Pensioners at 09:13