AIPRPA FORMATION IN ASSAM & NE REGION GETS A BOOST

Move Ahead with formation of 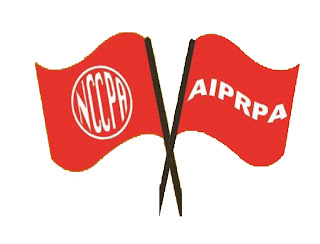 The Joint Circle Conference of Assam and North East NFPE Circle Unions that met at Agarthala (Tripura) was attended by GS AIPRPA also and during that Joint Conference the RCC (Regional Coordination Committee) of NFPE Unions of Assam and NE Circles has met in which the General Secretary AIPRPA had appealed for formation of AIPRPA in all those States. The RCC had at that point of time also decided to discuss in the Joint Circle Conference and accordingly the matter was placed before the Conference. The Joint Conference decided in its Policy & Programme Resolution that AIPRPA will be formed in all North Eastern States and Assam.

The matter was being pursued by the RCC and in the background of existence of Postal, RMS & MMS Pensioners organisation in Assam Circle and in some Districts, the issue was discussed thoroughly to sort out the modus operandi of merger of such Associations with AIPRPA.

In this important meeting the following decisions have been taken:

1.AIPRPA will be formed in Circle level and in all Divisions as per the decisions of NFPE Hyderabad Federal Council and Joint Circle Conference of Assam & NE CIrcles held at Agarthala.
2. Present Pensioners Association at the Circle level and at the Divisional level will be merged and converted into "AIPRPA" and in all Districts / Divisions where there is no Pensioners Association at present, AIPRPA will be formed.
3. This formation of AIPRPA shall be completed before the end of February, 2016.
4.The existing Assam Circle Adhoc Committee of Postal, RMS & MMS Pensioners Association will be renamed or reorganised into "All India Postal & RMS Pensioners Association" [AIPRPA] in a State level convention in the month of March, 2016 at Guwahati.
5. All the Circle Unions and Divisional Unions shall take serious effort and cooperate in the formation of AIPRPA in all Divisions.
The Resolution unanimously adopted in the above meeting of Circle Unions and Pensioners Leaders is placed hereunder for the information of all comrades. 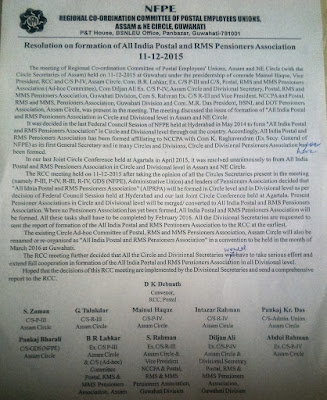 Posted by Postal Pensioners at 08:17