The 31st AIC of NFPE R3 has commenced its three day session today at Gandhinagar the capital of Gujarat. In the backdrop of the call for an indefinite strike by the entirety of CG Employees by the NJCA on 11th July; the call for one-day strike by the Trade Union Centres and Federations including the Confederation and NFPE on 2nd September, 2016 and the implementation of Cadre Restructuring by the Postal Department partially in the Postal  Wing Group 'C' section, this AIC is meeting. Comrades M.Krishnan (SG Confederation); C.C.Pillai (Ex-SG NFPE and CHQ Advisor to AIPRPA); R.Seethalakshmi (GS P4); P.Suresh (GS R4); and R.Sathyanarayana (GS Postal Accounts) among other leaders attended. On invitation from Giriraj Singh the GS of R3, Comrade K.Ragavendran General Secretary AIPRPA and Ex-SG NFPE also attending the AIC. CHQ Office Bearers of AIPRPA Comrades Y.Naghabhushanam and B.M.Sunda also participating in the AIC.

Here we can see the photos of Delegates attending  more than 1000 in number in the inaugural session; Comrade A.K.Padmanabhan National President of CITU inaugurating the AIC; and Comrade R.N.Parashar Secretary General NFPE delivering his address. More photos will be added later: 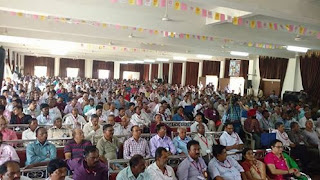 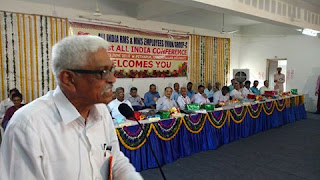 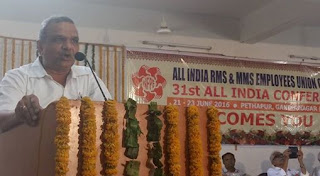 Posted by Postal Pensioners at 10:51